The 3.2-square-mile West Oakland Watershed begins in the Rockridge neighborhood of Oakland, the Claremont Country Club marking its eastern boundary. Expanding to the southwest and draining through a network of storm drains, it crosses I-980 and is bounded on the west by I-880 and the 0.2-square-mile West Oakland Bayshore Watershed. This smaller watershed is a narrow strip of land between the West Oakland Watershed and the historical bay shoreline. It extends north along I-880 and drains into the Emeryville Crescent, a crescent-shaped marsh and marine reserve on the Oakland-Emeryville border. 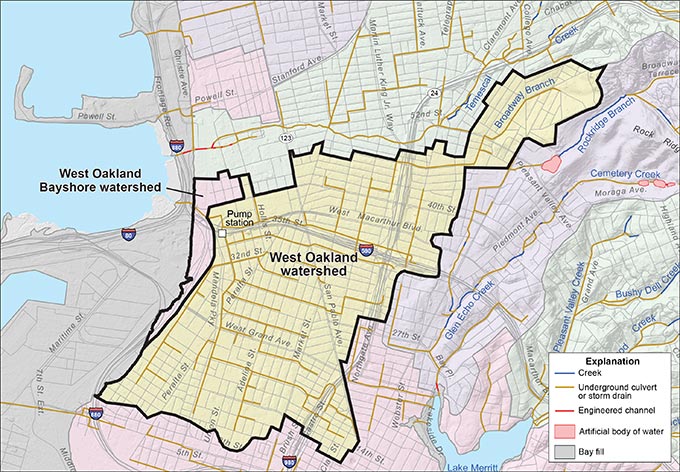 The West Oakland and West Oakland Bayshore watersheds historically provided habitat for a host of native amphibians, fish, and other aquatic animals. Poor water quality, culverting, and altered hydrology have devastated these populations. Due to dense commercial, residential, and industrial development throughout the watershed, native plant life has also been highly altered and degraded.

Powerful geologic processes, such as uplift, earthquakes, and mass wasting, created the West Oakland and West Oakland Bayshore watersheds. They both sit on an alluvial fan-–a fan-shaped deposit of water-transported material (alluvium) that typically forms at the base of hills or other topographic features where there is a marked change in slope. These alluvial soils are composed of layers of sand, gravel, silt, and clay eroded from the nearby hills. A large portion of the historical bay shoreline was a tidal marsh composed of organic material, silts, and clays. As Oakland expanded throughout the early 20th century, the shoreline was extended westward into the bay using numerous types of fill material. This contributed to the tragic collapse of a large section of I-880 during the 1989 Loma Prieta earthquake resulting in 42 deaths. Sitting on top of bay clay, a remnant of the tidal marsh that once existed there, the filled land was highly susceptible to soil settlement during an earthquake and correspondingly greater ground motion.

As with many urban areas, surface runoff carrying potentially harmful pollutants, such as fertilizers, pesticides, animal waste, heavy metals, and gas and oil, is a major resource concern. In addition, a significant amount of litter, particularly lightweight plastic products like food wrappers and drink containers, washes to the shoreline and bay through the networks of storm drains in these watersheds.
Waterbodies

The drainage system in these watersheds is a network of underground culverts and storm drains. Historically the Broadway Branch of Glen Echo Creek flowed through the northeast corner of the West Oakland Watershed, but this has also been channeled into underground culverts.

Flooding was a serious problem in West Oakland after the former lowlands and marshlands were developed in the late 1800s. In 1954, construction of an extensive storm drain network and pump station improved stormwater drainage from West Oakland to the Emeryville Crescent, a crescent-shaped marsh that stretches from the eastern approach of the Bay Bridge in Oakland to the foot of Powell Street in Emeryville. The two watersheds now direct water to the Ettie Street Pump Station where it is pumped under I-580 to the bay.

Mandela Parkway and Cypress Freeway Memorial Park mark the path of the Cypress Street Viaduct, part of I-880 built in 1957 and California’s first double-deck viaduct. It collapsed on October 17, 1989 during the Loma Prieta earthquake. The structure was demolished, and I-880 was rebuilt looping around West Oakland. A scenic walking and biking path now winds through the linear park past unique art installations that remember the victims and rescuers of the earthquake.

The Emeryville Crescent State Marine Reserve was established in 1985 to preserve marshland on the east shore of the San Francisco Bay. It is managed by the East Bay Regional Park District as part of the McLaughlin Eastshore State Park. The 103.5-acre reserve stretches from the Bay Bridge Toll Plaza at its southwest extent to the Powell Street Interchange of I-80 and the Emeryville Peninsula at its northernmost point. It encompasses the entire Emeryville Crescent marsh, so named for its crescent shape. A distinctive, highly visible tidal marsh, the Emeryville Crescent is the outfall for Temescal Creek and the West Oakland and West Oakland Bayshore watersheds and allows water to filter slowly through its extensive mudflats and marshlands before reaching the bay.
Restoration

During the late 1990s and early 2000s, portions of the Emeryville Crescent area were restored by Caltrans as part of the mitigation required for the I-80 flyover improvements. The Oakland/Emeryville shoreline at the south end of the project site includes approximately 558 acres of tideland and five acres of upland along the south side of Powell Street. The tidal area supports a distinctive and stable reach of tidal marsh and mudflats. Public access to the tidal area has been prohibited since the restoration project was completed by Caltrans. The small upland area along Powell Street includes no formal improvements other than two bus stops and is used primarily for bird watching and taking in views of the East Bay hills, the bay, and the Bay Bridge.
Get Involved

The organizations below fund or provide educational resources or coordinate volunteer activities in the watersheds. Educational and volunteer opportunities are usually free of charge. Additional links and resources can be found by visiting these sites.
© 2023 Alameda County Flood Control & Water Conservation District