The 6.7-square-mile Temescal Creek Watershed spans the northernmost section of the Oakland hills and includes several regionally significant parks managed by the East Bay Regional Park District (EBRPD). South of Highway 24, two of the watershed’s four creeks drain the Montclair residential district and flow into Lake Temescal. North of the highway, the other two creeks drain the Claremont hills residential area and Claremont Canyon Regional Preserve. Both of these join the main channel of Temescal Creek below Lake Temescal, from which point water flows primarily through culverts to the Emeryville Crescent State Marine Preserve. Here, visitors can enjoy spectacular views of both the Golden Gate and Bay bridges. 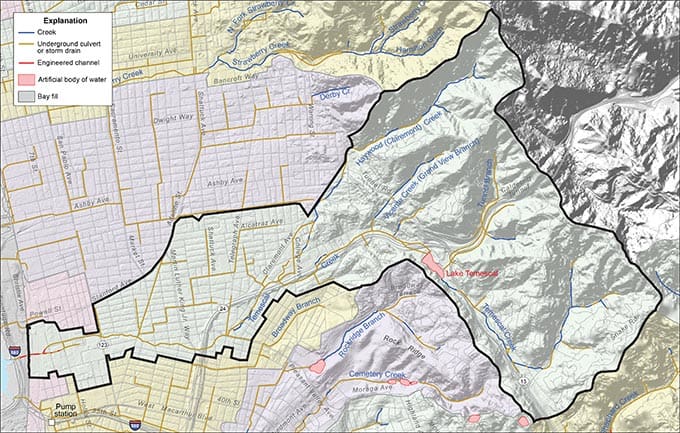 Riparian communities include native trees and plants such as big leaf maple, California buckeye, red alder, California barberry, ceanothus, and yarrow, to name a few. For a more comprehensive list, see The East Bay Regional Park District’s list of wild plants in the Temescal area. A dedicated local resident has photographed and documented 232 native and non-native plants in Claremont Canyon as well as a host of mushroom and animal species. Fish surveys in Lake Temescal have found largely non-native warm water sunfish such as largemouth bass, green sunfish, and bluegill. The lake is also stocked with rainbow trout and channel catfish.

Uplift on the east side of the Hayward fault created the hills drained by Temescal Creek and the linear valley through which the creek runs to the northwest. At the scarp of the strike-slip-fault, water collected to form a sag pond. The pond was later dredged and dammed to form Lake Temescal. After flowing in a culvert under Highway 24, Temescal Creek traverses the flatlands that sit atop the gravel and sandy soils laid down by the creek as an alluvial fan. Near the bay these alluvial deposits interfinger with tidal marsh silts and clays. From 1900 to the 1960s, the area was filled using slag, soil, and other inert materials from a nearby steel plant.

Degradation of habitat and poor water quality are significant issues for Temescal Creek, both in culverted urbanized sections as well as upstream of Lake Temescal where the physical habitat is more intact. In 2008, the Regional Water Quality Control Board tested macro invertebrates as indicators of water quality. In its technical report it found taxonomic richness to be generally low. Sensitive; indicator taxa were completely absent. Catastrophic wildfires are also a major threat, as they are throughout the East Bay hills, drastically and adversely altering the type and density of plant species and conditions of the soil surface. In 1991, the Oakland Firestorm saw just such widespread destruction of habitat. To prevent future catastrophic fires, the Claremont Canyon Conservancy is targeting non-native, highly ignitable trees such as eucalyptus and Monterey pine for removal.
Waterbodies

Temescal Creek flows through Oakland’s Montclair district to Lake Temescal and then to San Francisco Bay. It is joined by Vicente Creek and Claremont Creek before entering the bay at the Emeryville Crescent.

“Temescalli” means sweat house in one of the indigenous languages of Mexico. Early rancheros may have named the creek based on similarities of local indigenous Ohlone structures to those in prehispanic Mexico. The south fork of Temescal Creek begins in the northern section of Oakland’s Montclair district near the top of Pinecrest Road. City streets follow the creek until it leaves its canyon and flows north along Highway 13 in a linear valley formed by the Hayward Fault. An unnamed, culverted branch that drains the Caldecott Tunnel area joins the creek to flow into Lake Temescal. From the lake outlet, Temescal Creek flows primarily through culverts along its former drainage path. It follows Highway 24, skirting the north side of the Rockridge district of Oakland. At Telegraph Avenue it continues almost in a straight line for the rest of its course. It flows under Temescal Creek Park, where some water is diverted through an engineered, landscaped creek bed that runs along the east side of Claremont Avenue from Clifton Street to Clarke Street. It then continues to Emeryville in an engineered channel before crossing under I-80 to the tidal marshes and the bay.

In the 19th century, the north fork of Temescal Creek was renamed Harwood’s Creek after the owner of the property near the creek’s origin. It was renamed Claremont Creek in the early 20th century after the Claremont residential development. Claremont Creek drains Claremont Canyon, which extends above the historic Claremont Hotel and Resort. The creek is diverted around the hotel grounds through culverts that begin just above the hotel. Two long stretches of creek resurface in the residential Claremont district before the creek goes underground again and eventually joins Temescal Creek near the Rockridge BART Station.

Vicente Creek (aka the Grandview Branch) drains the Claremont hills area and joins the culvert for Temescal Creek near the Chabot Recreation Center. Most of Vicente Creek flows above ground, crisscrossing the Oakland-Berkeley city border through the residential Claremont neighborhood.

Temescal Creek flows through culverts under I-80 and into San Francisco Bay at the Emeryville Crescent State Marine Preserve near the Bay Bridge approach. The preserve is one of the last remaining tidal marshes in the central bay. Its tidal flats formerly showcased driftwood sculptures, which were removed in the 1990s so the marsh could recover. Today, pickleweed and cord grass are more abundant, and the tidal flats are a feeding ground for healthy populations of birds.
Recreation

Five parks and two preserves provide a host of recreational opportunities. The two preserves bookend the watershed–the Claremont Canyon Regional Preserve containing the headwaters of Claremont Creek and the Emeryville Crescent State Marine Preserve the mouth of Temescal Creek at the downstream end. In between, there are several opportunities to view and experience Temescal Creek in a park setting. Lake Temescal Recreation area offers public picnicking, swimming, and fishing. Other parks include the North Oakland Regional Sports Center, Garber Park, and two playgrounds located within the Rockridge-Temescal Greenbelt.

Part of the East Bay Regional Park District (EBRPD), the 208-acre Claremont Canyon Regional Preserve extends from above the University of California’s Clark Kerr Campus to Grizzly Peak Road. The picturesque canyon is accessed primarily through hiking trails running through the preserve. Stonewall-Panoramic Trail involves a steep .75-mile climb from Stonewall Road to the ridge top where hikers take in sweeping views of San Francisco Bay and the surrounding areas. The trail continues east along the ridge, straddling the boundary with university property. Gwin Canyon Trail is located south of Claremont Avenue and provides perhaps the best opportunity to enjoy Claremont Creek.

Just above the Claremont Hotel and below the Claremont Canyon Regional Preserve is another 13-acres of woodland named Garber Park. Owned by the City of Oakland, the park harbors a long loop trail that cuts through a forest of oaks, bay laurel, big leaf maples, and California buckeyes to Fireplace Plaza and its 1920s-era stone patio.

On the south side of Highway 24, an aboveground section of Temescal Creek’s Tunnel Branch flows near the North Oakland Regional Sports Center (aka Caldecott Field), which houses several playing fields. This perennial creek branch runs through an engineered gravel creek bed before heading underground at Highway 24.

Also part of EBRPD, the Lake Temescal Recreation Area is known for its large sandy beach on the north side of the lake that is used for sunbathing and swimming. Large grassy areas offer tables and grills for picnicking as well as two playgrounds. The lake has a fishing dock and is stocked with fish. Landvale Station Trail and East Shore Trail are wheelchair accessible. West Shore Trail and Oak Bay Trail are not wheelchair accessible.

The Rockridge-Temescal Greenbelt is an Oakland city park that extends over half a mile along the former Temescal Creek and incorporates Hardy Playground and Redondo Playground. Bordered on the north by Hardy Park, the greenbelt runs behind the Department of Motor Vehicles building on Claremont Avenue and ends at the intersection of Redondo Street and Clarke Street. A portion of the creek is visible where it is diverted to an engineered and landscaped creek bed before returning to its underground culvert.

Temescal Creek flows into San Francisco Bay at the Emeryville Crescent State Marine Reserve, located near the Bay Bridge approach. Established in 1985, the preserve is managed by EBRPD as part of McLaughlin Eastshore State Park. The preserve is one of the last remaining marshes in the central bay and both a home and temporary stopping place for many bird species.
Restoration

Several local environmental groups work to maintain and enhance the remaining habitat in the watershed. In 2012, the Garber Park Stewards completed an erosion control project along the banks of Harwood Creek. The project was funded by Claremont Canyon Conservancy, which also funds fire prevention efforts in and around the canyon. Friends of the Greenbelt (FROG) for Rockridge-Temescal recently completed a bank stabilization project in the engineered creek bed that runs through the greenbelt. At the Emeryville Crescent, efforts are underway to eliminate invasive cord grass from the marsh, making it more suitable as habitat for some endangered species.
Get Involved