The Sausal Creek watershed begins as a series of ephemeral creeks 1,300-1,500 feet above sea level in the Oakland Hills. Its three main tributaries drain the western slope of the East Bay hills and are bounded by Snake Road and Montclair Village to the north, Skyline Boulevard to the east, and Joaquin Miller Road, Lincoln Avenue, and Fruitvale Boulevard to the south. Its natural channels course through Dimond Canyon and Dimond Park and then dive under Interstate 580. In the Oakland flatlands, culverted sections of the creek channel alternate with open stretches of creek before disappearing into the last culvert at East 22nd Street. Finally, the creek emerges into the Oakland Estuary at the tidal channel that separates the city and island of Alameda from the mainland. 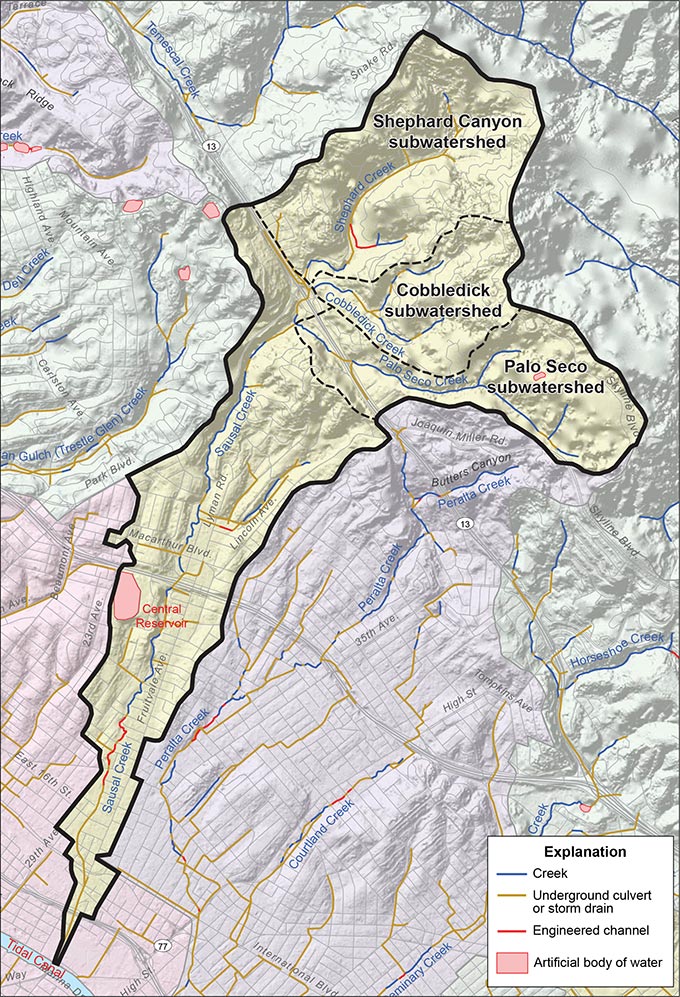 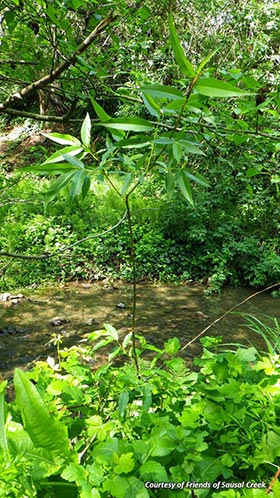 Sausal Creek is an urban creek that still has stretches lined with native trees and habitat and a small population of rainbow trout. Habitat communities include riparian, oak woodland, redwood forest, grassland, chaparral, and northern coastal scrub. Visit the Friends of Sausal Creek (FOSC) website for species lists and reports on native, non-local native, non-native, and rare plants, as well as mammals, fish, and aquatic insects of the Sausal Creek watershed.

“The entire Sausal Creek hydrologic system has been affected by watershed urbanization. Many of its creeks now flow only underground and most are an integral part of the City’s storm water drainage system. All of the major creeks in the upper watershed have also been modified through channelization, culverting, and the construction of weirs and drop structures.” – Martha E. Lowe, 2000 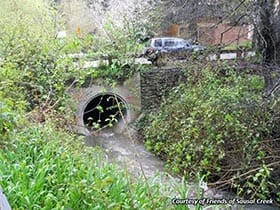 Cobbledick Creek and its tributaries have open channels with seasonal flows. Most of the creek is on private residential land. It runs along Scout Road and joins Shephard Creek to become Palo Seco Creek, which runs through Joaquin Miller Park to become Sausal Creek. The native shrubs and trees include toyon, manzanita, oak, and madrone.

Escher Creek is a locally named ephemeral tributary to Shephard Creek. Shepherd Canyon Homeowners Association is working to remove invasive plants, reduce erosion, and establish native plants along the creek. The creek originally flowed under the soccer field in Shepherd Canyon Park; now it curls around the north edge of the meadow to meet Shephard Creek in its culvert.

Palo Seco Creek is in the least developed of the four sub-basins. The majority of trees here are coastal redwoods and willows with blackberry in the understory. The creek channels for the most part remain open and unculverted. Palo Seco Creek has high quality aquatic habitat due to a great diversity of aquatic insects. A small population of rainbow trout lives in lower Palo Seco Creek.

Sausal Creek starts at the confluence of Shephard Creek and Palo Seco Creek, flowing almost straight south until it reaches the Oakland Estuary in San Francisco Bay. It makes its way through 100-foot deep Dimond Canyon, lined with California bay laurels, oaks, willows, and many native and invasive plant species. Above the Leimert Bridge, the creek is marred by grade control structures, culverts, and cement linings. Below the bridge is a restoration site where grade control structures were removed and thousands of native plants replaced invasive non-natives. At El Centro Avenue, the creek flows through a culvert into Dimond Park. In the Oakland flatlands, culverted sections alternate with open stretches of creek before disappearing into the final culvert at East 22nd Street.

Shephard Creek has limited opportunities for native plant restoration. What was once an open creek channel has now been diverted into a maze of culverts and storm drains, making for very little riparian and aquatic habitat. 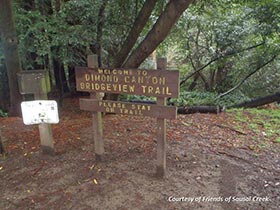 For people looking to explore the watershed, there is a wide range of hiking, walking, and biking trails accessible to the public. Oakland Parks and Recreation manages 2,500 acres of open space and 100 public parks. The East Bay Regional Park District maintains regional parks such as the Roberts Regional Recreation Area.Multipurpose trails abound for walking, jogging, hiking, and bicycling. Sausal Creek trailhead maps can be found on the FOSC website. The Oakland Dog Owners Group provides a map of accessible trails in East Bay parks for dogs.

A popular trail that runs alongside Sausal Creek through Dimond Canyon and up to Highway 13.

In Joaquin Miller Court off Mountain Boulevard, you will find this narrow trail that affords views of the “red sticks,” or redwoods, and the banks of Palo Seco Creek lined with California bay trees.

This two-mile walk following Sausal Creek begins at Fruitvale Avenue. It starts as an easy hike but then becomes steeper as you go through Dimond Park. From the end of the trail, you may return the way you came, use city streets, or take public transportation. Look for the many signs of urbanization as you hike up and down the trail.

One of the most popular trails in Joaquin Miller Park, this broad 2.5-mile trail is mostly level and shaded by young redwoods. It is used by hikers, bicyclists, dog walkers, and runners and is known for its scenic views of downtown Oakland, the Bay, and the San Francisco skyline.

This trail traverses the quiet Oakland hills neighborhood of Montclair. Built on the rail bed of the Sacramento Northern Railway, it is now a paved and flat community pathway, 1.5 miles long, with interpretive signs. It is a great place for walking, jogging, hiking, and bicycling as well as for children and pets.

This 500-acre park, nine miles from downtown Oakland, is a haven for hikers, equestrians, and bicyclists. The woodland trails in this urban wildland traverse redwood groves, oak woodlands, creeks, and meadows. Dogs are allowed on leash throughout the park, and there is an off-leash area as well.

Part of the East Bay Regional Parks system, Roberts Park is great for family and group picnics and has baseball fields, a swimming pool, and sand volleyball courts. It is home to a stand of second growth redwood trees, the old growth predecessors having been cut down between the 1840s and 1860s.
Restoration 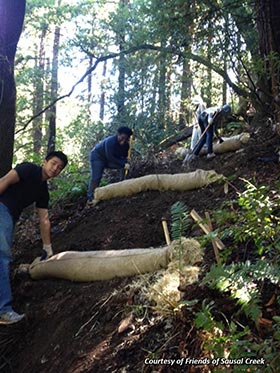 Despite the many ways in which the Sausal Creek watershed has been affected by urbanization, erosion, invasive species, litter, and illegaldumping, the remaining natural resources can be protected, enhanced, and rehabilitated. FOSC seeks to restore the integrity of the following ecological communities: riparian, oak woodland, redwood forest, grassland, chaparral, and northern coastal scrub. Within these undeveloped habitats is a wealth of biological diversity. Typical restoration efforts include removal of invasive plant species, propagation of native plants from the FOSC native plant nursery, removal of failing concrete structures, and the installation of erosion control material through bioengineering techniques. To find out about current restoration projects in the watershed, see the Map of FOSC Restoration Projects. 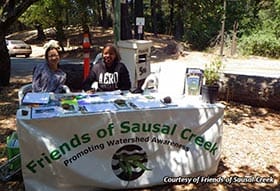 There are several organizations that fund or provide free watershed education programs and resources for residents and teachers in the Sausal Creek watershed. There are also many opportunities to get involved in creek cleanups, restoration efforts, and other volunteer activities.
© 2022 Alameda County Flood Control & Water Conservation District