The 3.8-square-mile Potter and Derby Creek Watershed lies predominantly in the city of Berkeley but spans the borders of Oakland and Emeryville in the east and southwest. Draining mostly flat land, the watershed begins on the west side of the Berkeley hills and runs west to San Francisco Bay. The relatively flat topography of the creek channels suggest that they were once tributaries of Strawberry Creek. As the population of Berkeley grew, Potter and Derby creeks were culverted and today are almost entirely underground in constructed channels.

The small .24 square mile (153 acre) Powell Street Watershed is located along the western end of Powell Street in Emeryville, south of the Potter/Derby Creek Watershed.  It drains a residential and industrial area through underground culverts to the bay. 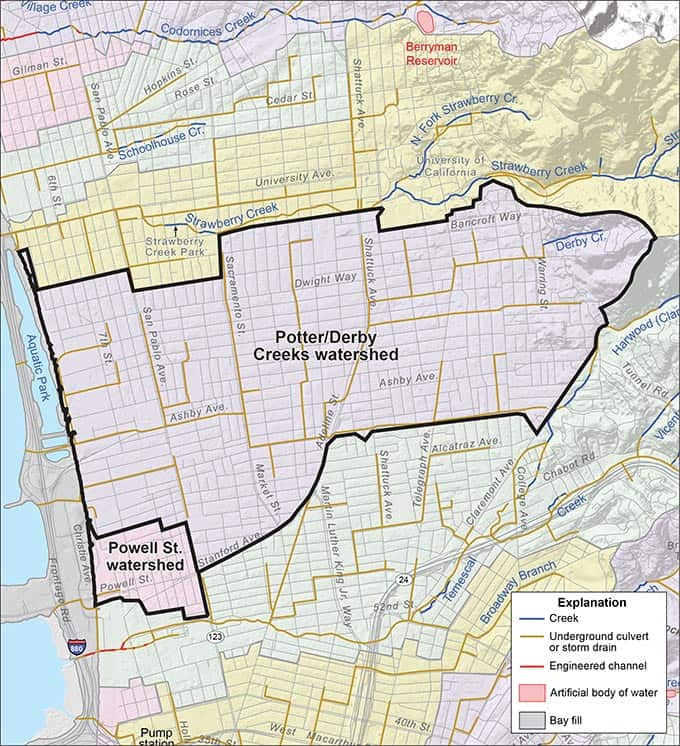 Historically Berkeley’s natural hydrology consisted of several small to medium-sized creeks, such as Codornices, Schoolhouse, Strawberry, Potter, and Derby creeks, that flowed from the Berkeley hills to San Francisco Bay. As Berkeley grew in the early 1900s, the flood plains of most of these creeks were paved, and their channels were gradually placed in covered culverts. Over time, Derby and Potter creeks disappeared entirely from the visible landscape with the exception of a small open section on the University of California, Berkeley campus, along with intermittent seeps and springs.

Potter and Derby creeks historically provided habitat for native amphibians and other aquatic organisms. Poor water quality, culverting, and altered hydrology have devastated these populations, and little research has been conducted on what life the creek supports today.

Powerful geologic processes, such as uplift, earthquakes, and mass wasting, created the Potter and Derby Creek Watershed. The watershed sits on an alluvial fan—a fan-shaped deposit of water-transported material (alluvium) that typically forms at the base of hills or other topographic features where there is a marked change in slope. These alluvial soils are composed of layers of sand, gravel, silt, and clay eroded from the nearby hills. To learn more about the hydrology and geology of the Potter and Derby Creek Watershed please refer to the Environmental Impact Report found on the UC Berkeley 2020 Long Range Development Plan website.

As with many urban areas, surface runoff carrying potentially harmful pollutants, such as fertilizers, pesticides, animal waste, heavy metals, gas and oil, and other contaminants, is a major resource concern. The creeks also transport a significant amount of litter to the shoreline and bay, particularly lightweight plastic products like food wrappers and drink containers that enter through connected storm drains.
Waterbodies

Except for a small stretch of Derby Creek on the University of California, Berkeley campus, the channels of these two creeks have been completely filled in and replaced by a rectangular storm drain network. The open section of Derby Creek totals approximately .2 miles. The network of storm drains ends in Berkeley at two outlets that connect to the bay: one at the south end of Aquatic Park just north of Ashby Avenue and the other just south of Ashby.
Recreation

The watershed offers a wide range of hiking, walking, and biking trails along with regional and city parks accessible to the public. The mouths of Potter and Derby creeks are located near Berkeley’s Aquatic Park.

The San Francisco Bay Trail offers access to the mouths of Potter and Derby creeks. The trail provides easily accessible recreational opportunities for hikers, joggers, bicyclists, skaters, and other outdoor enthusiasts, as well as opportunities for wildlife viewing and environmental education. Potter and Derby creeks reach the San Francisco Bay in two large pipes near the trail. This area has an excellent view of the mud flats at the creek mouth, which are often dense with migrant and wintering shorebirds from fall to spring.

Berkeley’s Aquatic Park is located between Ashby and University avenues in southwest Berkeley along the Interstate 80. A long, narrow lagoon stretches the length of the park that provides habitat to a variety of animal and plant life. The parkland surrounding the lagoon provides ample bird watching opportunities as well as a network of pedestrian and bicycle trails, picnic areas, and a children’s play area along the Interstate 80.
Restoration

Since Derby and Potter creeks are mostly culverted and flow under city infrastructure, there have been few restoration opportunities. An ordinance enacted by the city of Berkeley in 1989 regulates and minimizes further structural encroachments into sensitive riparian zones. The Preservation and Restoration of Natural Watercourses Ordinance, BMC 17.08, also known as the Creek Protection Ordinance, was revised in 2006 after a lengthy public process led by the Creeks Task Force established by the city council.
Get Involved

Please see our list of organizations below, that provide volunteer and educational opportunities for the public.
© 2022 Alameda County Flood Control & Water Conservation District
Skip to content