The Peralta Creek Watershed, also known as East Creek Watershed, stretches from the Oakland hills through urban residential and commercial areas to the San Leandro Bay. The watershed is drained by several small creeks that join near the bay. From north to south these are Peralta Creek (the largest), Courtland Creek, 54th Avenue Creek, and Seminary Creek. Before flowing beneath I-880, the four join to form East Creek Slough, a straight engineered channel that replaces an old meandering tidal-marsh slough of the same name. East Creek flows into the San Leandro Bay near 50th Avenue. 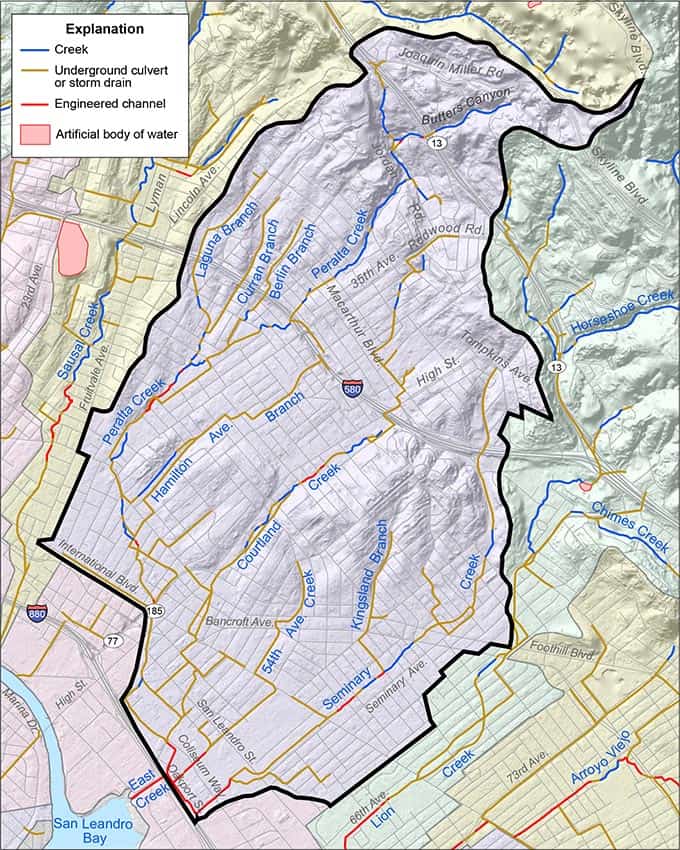 The Peralta Creek Watershed has several plant communities that are intact despite the presence of invasive species such as ivy, vinca, broom, acacia, and eucalyptus. These communities are typically in the upper watershed and low-density urban areas. At Butters Canyon, the headwaters of Peralta Creek, the dominant canyon plant community is the California bay forest, which comprises bay, oak, redwood, buckeye, and some invasive tree species. There are also riparian forest, oak woodland, and coastal sage scrub communities. For lists of each of these plant communities and pictures of invasive plant species at Butters Canyon, see the Long-Term Management Plan on the Butters Conservation Conservancy website. Native fauna include Pacific Chorus frogs, white egrets, mallards, and raptors. Peralta Creek does not have adequate habitat for steelhead trout. For the region-wide report on steelhead restoration, see the San Francisco Estuary Watersheds Evaluation.

Peralta Creek heads in the Oakland Hills, flowing through canyons eroded into sandstone, shale, greenstone, and serpentinite that formed on the sea floor over 60 million years ago. These rocks have been uplifted to form the hills, and are now sliced by strands of the Hayward fault. Peralta Creek follows a major splay of the Hayward fault through the canyon along Jordan Road. Downstream of Wisconsin Street, Peralta Creek leaves the steep hills and flows through low hills underlain by sand and gravel deposits left by ancestral creeks that drained these hills over the past 2 million years. The landscape flattens downstream until the stream is running on its own sand and silt deposits laid down over the past 10,000 years.

The creeks of the Peralta Creek watershed experience their greatest discharges during heavy winter storms and continue to flow during the winter months as water, soaked into the ground during winter rains, slowly seeps into the channel. During the summer, the upstream reaches of the creek may be completely dry while downstream reaches still receive flow from groundwater.

Invasive plant species, littering, and illegal dumping. A study by the East Bay Academy for Young Scientists (EBAYS) shows high levels of nitrates, making the waters of Courtland Creek unsafe for vertebrates. To see the synopsis of EBAYS’ report about the health of Courtland Creek, click here.
Waterbodies

54th Avenue Creek runs underground beginning at 50th and Vicksburg avenues, travels under 52nd Avenue and then turns southward under International Boulevard. It continues under 54th Avenue until it becomes an engineered channel and drains into East Creek and San Leandro Bay.

Courtland Creek has its origins near Monterey Boulevard and Redwood Road. Though mostly underground, significant stretches of the creek are still exposed. It runs from the Oakland hills along Courtland Avenue through East Oakland’s Maxwell Park and the Fairfax and Fremont districts. Historically a tributary to the larger Lyon Creek, it was diverted after the Oakland Coliseum was built in 1966. The Bay checkerspot butterfly is a federally threatened species and is endemic to the area.

Peralta Creek originates in the Oakland hills. The main stem flows through Butters Canyon at an elevation of 1,015 feet to a culvert under Butters Drive. It then bisects the city of Oakland as it travels downstream through the Oakland flatlands. For the majority of its journey, it flows in underground pipes and culverts, crossing under Highway 13, I-580, I-880, and a BART line before it emerges in an engineered channel and empties into the San Leandro Bay.

The Berlin Branch is a narrow creek that runs along Maple Avenue for a little over a mile before joining Peralta Creek. Most of the creek flows underground in storm drain pipes beneath roads, buildings and other infrastructure. However, one section of the creek runs open with poplars, oaks, walnut and redwood trees lining its banks. Wildlife may include visiting cedar waxwings and year-round residents such as downy woodpeckers, western scrub jays, and black phoebes. The creek remains dry for much of the year, but during winter it carries storm runoff.

The Curran Branch runs totally underground in a culvert fed by a network of storm drains. It starts near Coolidge Avenue and Carmel Street.

The Harrington Avenue Branch begins near I-580 and Viola Street. It flows parallel to Harrington Avenue in an underground culvert as well as above ground. It joins with Peralta Creek at 36th Avenue and Foothill Boulevard.

The Laguna Branch starts at Carmel Street and Laguna Avenue and makes its way southward through the Lower Dimond district and underneath the I-580. It meets the Curran Branch at Ward Lane. From there, it alternates between an open, engineered, and culverted creek until it merges with Peralta Creek at Davis Street.

Seminary Creek begins in the foothills and runs mostly in underground pipes through flatlands neighborhoods and finally under industrial warehouses before it enters culverts under Coliseum Way and becomes an engineered channel that follows the peripheries of the Oakland Swap Meet, or Coliseum Public Market. The creek ultimately empties into San Leandro Bay, which is part of the Martin Luther King Jr. Regional Shoreline.

The Kingsland Branch starts near Fleming Avenue and Rawson Street. It flows through an underground culvert that merges with Seminary Creek on Harmon Avenue past 57th Avenue.

The original East Creek was a wide tidal-marsh slough that meandered along the northeastern margin of San Leandro Bay, unconnected to the upland creeks. The creeks of the Peralta Creek watershed have been artificially connected to San Leandro Bay via an engineered channel built where East Creek once lay. The new channel was named for its predecessor.

San Leandro Bay is an arm of the San Francisco Bay, located along the east side of the Oakland International Airport and Bay Farm Island. Once a rich habitat for wildlife, most its original marshland and habitat have been filled or dredged. See Arrowhead Marsh on the East Bay Regional Parks website to find a map of the remaining area of these tidal marshes.

For people looking to explore the watershed, there are several trails and parks accessible to the public for walking, biking, and recreation.

A shady, narrow, and curving road that is available to residential users, walkers, and bicyclists.

Begin at Peralta Hacienda Historical Park, a popular destination on the Juan Bautista de Anza National Historic Trail. See the signage to learn about the historical importance of the area, then take a long walk crossing Peralta Creek and heading southeast to Courtland Creek. Follow the creek up to Fairfax and Maxwell parks. Hike over the hill to Mills College, and return to the starting point via the Laurel district.

Allendale Recreation Center is a community-based facility in the center of Oakland that offers free or low-cost programs for people of all backgrounds. The center includes two baseball fields, a picnic area, outdoor basketball courts, play structure, and other amenities.

Brookdale Park is in East Oakland between High Street and Eastman Avenue. It offers green space as well as baseball fields and basketball courts.

Butters Canyon is a half-mile stretch of wild, woodsy land along Butters Drive, just off Joaquin Miller Road in Oakland, California. This serene oasis of native trees houses hundreds of species of wildlife and plants and represents a green riparian and wildlife corridor at the headwaters of Peralta Creek. The canyon is enjoyed daily by dozens of neighbors and people around the bay, including many groups of cyclists.

Courtland Creek Park is a five-block linear park located one block south of High Street between 45thand Brookdale avenues along Courtland Avenue. It was designated an official Oakland park in May 1997. The walking park has two staircases lead down to Courtland Creek. Local murals and artwork decorate the park, and two rows of plum trees represent the route of the Leona streetcar line that once passed through.

Peralta Hacienda Historical Park is located at the corner of Coolidge Avenue and Hyde Street. It is a six-acre park that includes the historic Core Adobe Area, the 1870 Peralta House, and the Peralta Creek Nature Area. The park is open year-round and offers locals and visitors art and educational programs, museum exhibits, and an outdoor space for community programs, classes, and recreation.
Restoration 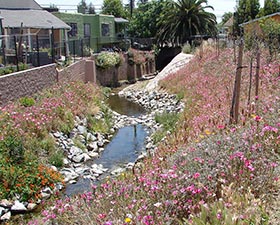 Ongoing restoration projects in the watershed serve to provide flood protection, enhance the environment, and rehabilitate natural habitat. At the Peralta Hacienda Historical Park, volunteers rise to the challenge planting natives, picking up trash, and maintaining the native plant garden. In the upper parts of Peralta Creek Watershed, the Butters Conservation Conservancy focuses on the following restoration activities: invasive plant control, soil erosion management, trash removal and fire abatement, and native plant establishment. The overarching goals are to reduce non-native vegetation, increase biodiversity, promote stewardship, and increase awareness. For more detailed information, see the Long-Term Management Plan on the Butters Conservation Conservancy website. Additional restoration projects are featured on Google Earth watershed map for Western Alameda County.Beginning in 2006, a 300-foot underground culvert was demolished by the District to daylight the creek, and banks were widened to enable it to carry a 100-year flood. The creek was restored with a more natural step-pool system and native plants on the banks. An amphitheater, pedestrian trail, bridge, lighting, and interpretive signs were added to further enhance the area. For more information, click here.
Get Involved