The 1.2-square-mile Oyster Point Watershed drains the area east of Oakland International Airport and a former landfill that is now the Oyster Bay Regional Shoreline. Drainage is carried by underground culverts to an engineered channel that flows to Oyster Bay—named for the oyster farms that once existed just off shore.

Also 1.2 square miles, the San Leandro Marina Watershed is located south of Oyster Point and includes the marina, a public golf course, and Marina Park. The watershed is drained by two underground culverts that flow to a larger engineered channel and discharge near the marina. 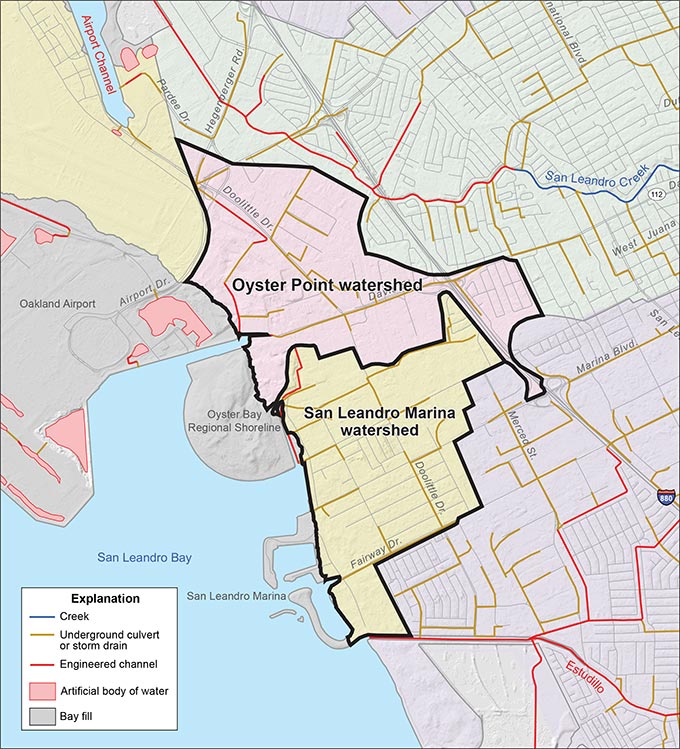 The Oyster Point and San Leandro Marina watersheds drain industrial areas, golf courses, and some parkland entirely through engineered channels and underground culverts. As a result, the watersheds support few plants and animals until they approach the bay. Oyster Bay Regional Shoreline is a former landfill that was converted to parkland in the 1980s. The conversion is an ongoing process that continues today. Clean soil was recently imported to plant mostly native trees and shrubs and turf for recreational purposes. A shoreline ecosystem is evolving that provides habitat for small mammals and shorebirds.

Large shell deposits off the East Bay and San Mateo shorelines in central San Francisco Bay provide evidence that oysters and other shellfish once thrived there. The oysters provided food for bat rays and shorebirds and were collected by Native Americans. European settlers supplemented the native oyster population with an Atlantic species when they began farming oysters in the 1890s, creating a successful industry. Oyster Bay was named for the oyster farms off the San Leandro shoreline. Water pollution and the filling of tidal flats and marshes to create land for airports, landfills, marinas, and the like led to the failure of the industry. By 1939, oysters either died from lack of oxygen or were unsafe to eat. Today Oyster Bay supports a limited population of shellfish, including non-native, native, and hybrid oyster species. Experimental oyster restoration projects are underway in several locations within San Francisco Bay.

Oyster Point and San Leandro Marina watersheds sit in the low-lying flatlands composed of soils laid down during the Holocene epoch by the large alluvial fans of San Leandro Creek to the north and San Lorenzo Creek to the south. With some small exceptions, the shoreline along this part of the bay is formed largely by artificial fill of mixed origins.

The San Leandro Marina is built on artificial fill with berms that encircle it to protect docked boats from wave activity and provide a small boating lagoon. By design, marinas limit flushing from tidal surge and strong currents that would otherwise disperse pollutants and bring in cleaner water. Where they are not dispersed, pollutants build up and degrade water quality. Typical pollutants in marinas come from illegal wastewater discharge from boats, urban runoff, and fuel. The limited tidal flushing and currents in marinas lead to sediment accumulation that requires regular dredging to keep marinas viable. Dredging, however, can stir up sediments where pollutants have settled. With so much potential for water quality impacts, marina design, discharges, and dredging activities are tightly regulated.

Part of the greater San Francisco Bay, Oyster Bay lies between Oakland International Airport and San Leandro Marina. It was named for the oyster farms that thrived in the tidal flats off the San Leandro shoreline until the oysters died off along with the industry they supported. Their demise was caused by water pollution and the filling of tidal flats and tidal marshes, such as the large nearby fills for Oakland International Airport, Oyster Point Landfill, and San Leandro Marina.
Recreation

The San Francisco Bay Trail (Bay Trail) follows the shoreline around the entire bay. Within San Leandro, the Bay Trail is also known as the San Leandro Shoreline Trail, which extends from San Lorenzo Creek to the south through Marina Park and San Leandro Marina. The trail continues to Oyster Point where it hugs the water, then branches off across the Oyster Bay Regional Shoreline. The trail is accessible from the parking lots at both parks.

Oyster Bay Regional Shoreline, also known as Oyster Point, is not a point at all but a large bulbous landform that, until the 1980s, was used as a landfill. The East Bay Regional Park District converted it to parkland, a long process that is ongoing. The site has been topped with clean soil, graded, and planted with trees, shrubs, and turf for playing fields. In addition to the Bay Trail along the shoreline, multi-use trails climb to the park’s viewpoint where a large sculpture mimics the form of a wave. There are seven group picnic areas among the tree berms and turf along the multi-use trails. The park is accessible from Neptune Drive off Marina Boulevard in San Leandro.

Where there was once a landfill that created a bulbous landform known as Oyster Point, there is now the Oyster Bay Regional Shoreline. The landfill was closed in the 1980s and has been converted by the East Bay Regional Park District to parkland for hiking, bicycling, and picnicking. Clean soil was imported and graded to improve drainage and provide a foundation for the trees and shrubs that came next. The project is ongoing, as large areas remain to be converted. Although this land use conversion is not a “restoration” of what was once the bay, it is a noteworthy project that provides more public access to our local waterways.
Get Involved

Information about volunteer and educational opportunities can be found by visiting these sites.
© 2022 Alameda County Flood Control & Water Conservation District
Skip to content