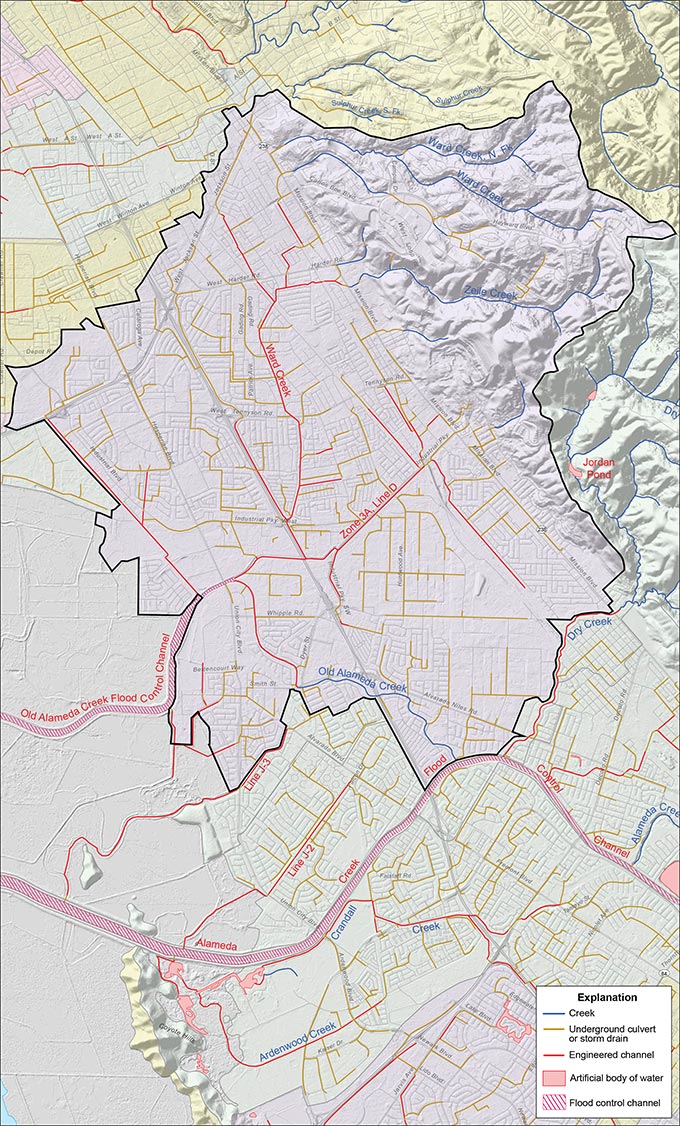 In the 1970s, twelve miles of Alameda Creek was channeled, then diverted at Cann Park in Union City to flow south of its historic path. This diversion, now known as the Alameda Creek Flood Control (ACFC) Channel, flows from Niles Canyon to the bay near Coyote Hills Regional Park. Although it is now channeled from Hesperian Boulevard to San Francisco Bay, Old Alameda Creek still flows to its historic outlet through Eden Landing, a 5,500-acre wetland restoration site. The creek bed extends from the channeled section near Hesperian Boulevard to its historic upstream path at Cann Park. Here it connects to the ACFC Channel via a gated culvert that allows water to flow from the channel into Old Alameda Creek when water is high.

The upper reaches of Old Alameda Creek Watershed, particularly the undeveloped areas, support diverse vegetation communities typical of the East Bay hills. In some areas closer to the urban interface, highly invasive plants like French broom and pampas grass are also prevalent. The East Bay Regional Park District’s (EBRPD) Wild Plant Checklist for Garin Regional Park, located in the upper watershed, includes all plants identified within the park and is a good example of typical flora in the area. The upper watershed area also contains important habitat for sensitive wildlife species such as the California red-legged frog and Alameda striped racer. Old Alameda Creek supports common fish species such as the threespine stickleback and prickly sculpin. Migratory fish, however, disappeared in the 1960s with the construction of dams and water diversions. In recent years, migrating steelhead trout have been found in Old Alameda Creek, but conditions for successful spawning do not exist.The Old ACFC Channel lies almost entirely in former salt ponds now being restored to tidal marsh and managed wetlands as part of the South Bay Salt Pond Restoration Project. The restoration will provide important habitat for nesting and migratory shorebirds and waterfowl. Some managed wetlands will remain as saline pond habitat areas for shorebirds that stop here during their migration or have taken up residence. In particular, the Western snowy plover, a federally listed threatened species, nests on islands within salt ponds. Although the snowy plover now breeds in salt ponds, it probably did not breed in San Francisco Bay prior to the 1800s when more intensive salt production began. The American avocet and black-necked stilt also began breeding in the bay after intensive salt production began.

The Old Alameda Creek Watershed was shaped by sediments deposited over thousands of years from San Lorenzo Creek to the north and Alameda Creek to the south. San Lorenzo Creek deposited sediments at its exit from the East Bay hills, the apex of the creek’s wide alluvial fan. Here sediments accumulated, leaving a rise that descends bayward. Ward Creek drains northwesterly across Jurassic period volcanic rock before making a sharp southwest turn away from the rise. Zeile Creek begins a similar southwesterly turn around the rise before joining Ward Creek. Historically Ward Creek flowed southwest to the bottom of the rise where it flowed into Alameda Creek.

Old Alameda Creek is listed as a polluted water body as defined by the Clean Water Act because the amount of trash in the creek impairs “beneficial uses” for wildlife and recreation. To ensure water flow, maintenance crews for the Alameda County Flood Control and Water Quality District (ACFCWQD) must routinely remove trash from the creek near Eden Landing Ecological Reserve. Siltation is another major issue that further impedes water flow in the channelized portion of the creek. The channel is subject to tidal action and receives both estuarine and upstream sediment. ACFCWQD must remove the accumulation and redeposit it in areas in San Francisco Bay with sediment deficits. The restoration at Eden Landing was designed so that tidal action would scour sediments within the channel and build natural tidal marsh channels in the former salt ponds.
Waterbodies

Ward Creek and Zeile Creek drain the north and south sides of CSUEB, respectively. The creeks abruptly turn southwest as they make their way through an approximately six-mile-wide area of urban flatlands in Zone 3 of the Alameda County Flood Control and Water Conservation District (the District). Ward Creek engineered channel is joined by three other major engineered channels, the District’s lines D, N, and A2, before joining a second major flood control channel, the Old Alameda Creek Flood Control (Old ACFC) Channel, so named because it forms a western extension of Old Alameda Creek. The former Cargill Salt Ponds, currently being restored as tidal marsh and managed wetlands, surround Old Alameda Creek along its approach to the bay.

Zeile Creek drains the north portion of Garin Regional Park in Hayward then runs along the border between the park and California State University East Bay (CSUEB). The creek drains the neighborhood south of CSUEB and flows through Holy Sepulchre Cemetery before heading underground at Mission Boulevard. It then flows through culverts and engineered channels before joining the Ward Creek engineered channel at Huntswood Avenue.

Ward Creek flows westward from the Hayward hills northeast of CSUEB through Memorial Park and into Ward Creek engineered channel where it is joined by several other flood control networks before entering the Old Alameda Creek Flood Control (Old ACFC) Channel.

The Alameda County Flood Control and Water Conservation District uses a naming system for flood control zones and drainage lines within zones. The Old Alameda Creek Watershed is in Zone 3, through which several major lines flow to the Ward Creek channel. Engineered culverts as far north as Highway 92 drain to Line H, which eventually joins the channel at I-880. Line D accepts drainage from the area surrounding the South Hayward BART Station and from Line N, which drains the area north of the Dry Creek Watershed. It then runs southwest along Industrial Parkway until it joins the Ward Creek channel.

Old Alameda Creek still flows in its original natural channel as far as Cann Park in Union City. The lower portion of the creek was rerouted when the Alameda Creek Flood Control (ACFC) Channel was constructed in the early 1970s, diverting the flow south in a more direct line to the bay. The Old ACFC Channel to the north receives most of its flow from Ward Creek engineered channel and Line A2, which drains the San Mateo Bridge approach south of Highway 92. Line A2 collects runoff through a series of culverts then parallels the railroad tracks heading southeast to the Old ACFC Channel.

The Old ACFC Channel flows to San Francisco Bay through Eden Landing Ecological Reserve, 5,500 acres of former industrial salt ponds extending from the south side of the San Mateo Bridge approach to the ACFC Channel. Eden Landing is being restored to tidal marsh and managed wetlands as part of the South Bay Salt Pond Restoration Project. Old Alameda Creek has been breached in several places where it formerly bisected the salt ponds, making it an integral part of the varied wetland habitats.
Recreation

The open creeks within the Old Alameda Creek Watershed are nearly all bordered by trails, making them attractive places for hikers, joggers, and cyclists. Garin Regional Park covers much of the upper watershed surrounding Zeile Creek, and Eden Landing State Ecological Reserve includes the baylands surrounding the last few miles of Old Alameda Creek. There are two city parks along Ward Creek and three along Old Alameda Creek that provide creek views and direct access to creek trails.

The six-mile Greenbelt Trail in Hayward begins in Memorial Park, follows the north fork of Ward Creek through Ward Creek Canyon, then loops around to the south fork for its return. The multi-use trail sees mostly walkers and joggers with occasional bikers and horses. It passes a small picnic area on the north folk known as Greenbelt Park, then cuts through the south end of East Avenue Park.

Managed by the East Bay Regional Park District (EBRPD), Garin Regional Park is located adjacent to California State University East Bay (CSUEB). The park sits on the former site of Garin Ranch, owned by Andrew Garin, who maintained large apple orchards. The ranch was sold to the EBRPD in 1966, but some of the antique apple varieties are still farmed today and celebrated at the annual Garin Apple Festival. A visitor center within Garin Park highlights the rich history of the area. Garin Park has miles of trails and is a place where people can see much of the flora and fauna native to the watershed.

Located below CSUEB at Mission Boulevard, the city of Hayward’s Memorial Park is crossed by the Ward Creek riparian corridor. The park is home to the Hayward Plunge public pool, tennis courts, and picnic areas. It is also the trailhead for the Greenbelt Trail.

The Hayward Area Recreation Department’s East Avenue Park is located in the Hayward hills along the north fork of Ward Creek and can be accessed on East Avenue between Paul Court and Ridgeview or via the Greenbelt Trail. The park has sports fields, picnic areas, playgrounds, and trail access.

The five-acre Cann Park marks the location where Alameda Creek was diverted in the 1970s, causing the remaining natural channel to be renamed Old Alameda Creek. It is an excellent place to view the flood control channel alongside the historic creek bed and enjoy the shade of the historic riparian corridor.

San Andreas Park is located alongside the historic channel of Old Alameda Creek downstream from Cann Park on Santa Cruz Way. The park offers a shady open space and baseball diamond. The creek channel can be viewed by crossing the playing field.

Downstream from San Andreas Park, on an engineered but open portion of Old Alameda Creek, Sugar Mill Landing Park is bordered by the Alameda Creek Trail. The park is known primarily as the site of a memorial to the 33 passengers and seven crew members who died aboard United Airlines Flight 93 on September 11, 2001.

The Old ACFC Channel flows to the 5,500-acre Eden Landing Ecological Reserve in Union City and Hayward, where 630 acres of tidal marsh have recently been restored and more restoration is planned. The reserve lies between Mt. Eden Creek to the north and the ACFC Channel to the south and extends inland nearly to Hesperian Boulevard. As part of the restoration effort, a new segment of the Bay Trail provides public access with interpretive panels to enhance wildlife appreciation.
Restoration

The Old ACFC Channel flows through Phase I of a 5,500-acre wetland restoration site at Eden Landing. This site is one of three locations being restored as part of the 15,100-acre South Bay Salt Pond Restoration Project. The original tidal marsh had been converted to a system of levees and ponds where the influx of water was managed for salt production. The restoration project seeks to restore and enhance diverse wetland habitat, provide wildlife-oriented public access and recreation, and mitigate flooding. Eden Landing is a California Department of Fish and Wildlife Ecological Reserve that lies between the ACFC Channel and Mt. Eden Creek to the north. Phase I of the restoration covers 630 acres between Old Alameda Creek and Mt. Eden Creek. In 2012, construction was completed and tidal action was restored to several former salt ponds by breaching the levees of the Old ACFC Channel and Mt. Eden Creek Flood Control Channel. The project is designed so that increased tidal action into and around the Old ACFC Channel removes silt deposits and redistributes sediment where it is most needed to reestablish historic tidal marsh channels and native vegetation. Phase II of the restoration involves constructing a series of reconfigured managed ponds with different salinities.
Get Involved