The 5.6-square-mile Oakland Estuary Watershed drains a large area of dense urban land uses in central Oakland, including residential neighborhoods, the downtown business district, the Port of Oakland, historic Jack London Square, and the shores of Lake Merritt. Located within the larger San Francisco Bay, the Oakland Estuary is a strait between Alameda Island and Oakland, stretching from the Port of Oakland to the Fruitvale Bridge. The most intense land use in the watershed is the Port of Oakland’s container shipping operations on the west end of the estuary. The fifth busiest container port in the United States, it houses six shipping terminals, three of which lie along the estuary. Two intermodal rail facilities, a major freeway network, and a bustling commercial downtown all operate in and adjacent to the Oakland Estuary Watershed. 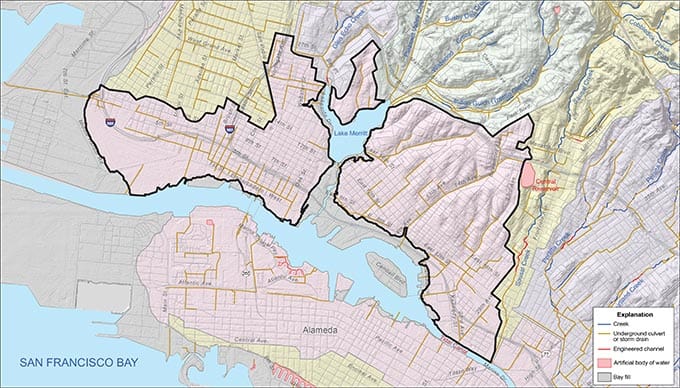 Oakland’s waterfront once comprised hundreds of acres of tidal marsh and tidal flats. Lake Merritt, adjacent to the downtown business district, was a natural tidal inlet with a marshy shoreline connected to the Oakland Estuary by a wide channel. Dredging and filling for military, port, and commercial uses dramatically changed the shoreline. Today, most of the land within the watershed is made of impermeable hard surfaces. Drainage flows entirely through underground storm drains that lead to Lake Merritt and the estuary. Despite the lack of habitat opportunities in a largely underground drainage system, Lake Merritt and the Oakland Estuary provide viable habitat for fish, shorebirds, and waterfowl. Lake Merritt is one of many stopovers along the Pacific Flyway and was designated the first national wildlife refuge in 1869. At that time, five bird islands were constructed within the lake, the largest of which is now home to hundreds of egrets, herons, Canada geese, and many other species. A dam and tide gate were also installed to control water levels in the lake, but this resulted in reduced water circulation. The tide gate was removed in 2013 to restore natural tidal action and circulation.

Soils in the upper Oakland Estuary Watershed were deposited in the Pleistocene epoch by the many creeks that once flowed through present-day residential neighborhoods surrounding Lake Merritt. That drainage eventually formed the lake itself in the late Pleistocene more than 10,000 years ago. The western portion of the watershed is composed primarily of Holocene epoch beach and dune sand. The Oakland shoreline was formed largely by artificial fill of mixed origins on top of former tidal marsh and tidal flats.

Environmental challenges in the Oakland Estuary Watershed include trash, water quality, and sediment contamination. As a watershed draining primarily urban areas, storm drains entering Lake Merritt carry excessive amounts of litter, especially yard waste, leaves, and soil. In 2000, about 38,000 pounds of litter was recovered from the lake. The Oakland Estuary is an EPA-designated impaired water body due to high levels of PCBs, mercury, lead, and pesticides. Sediments also contain high levels of these substances as well as selenium. The occasional dredging in shipping channels that is necessary for the port to function may exacerbate these problems by stirring up contaminated sediments.
Waterbodies

The Oakland Estuary is a straight that runs between Oakland and Alameda Island connecting central San Francisco Bay to San Leandro Bay. Feeding into the Port of Oakland, it receives heavy use from cargo vessels up to 1,000-feet long, typically with +40-foot drafts. It is also a popular site for sailing and kayaking. The straight has several named areas within it, even though they are not separate bodies of water.

Middle Harbor is on the west end of the straight where the Port of Oakland has two of its largest terminals. At the western end of Middle Harbor is a park and habitat restoration area. The terminals and the park were all built on bay fill.

Oakland Inner Harbor, containing one terminal and a 1,500-foot-diameter turning basin, lies between Middle Harbor and the Lake Merritt Channel. Adjacent to the port terminal is a commuter ferry terminal and the Webster and Posey tubes (tunnels) that run under the strait and connect Oakland to Alameda. Jack London Square is a port-owned commercial area between the ferry terminal and the Lake Merritt Channel that includes interpretive panels recognizing the shoreline once frequented by Jack London.

Brooklyn Bay lies further east between Oakland and Coast Guard Island, a former marsh that was filled to create a small island. A number of small-boat marinas dot the shoreline. The estuary once ended just beyond Brooklyn Bay in a tidal marsh. A canal was excavated through the marsh to connect the straight to San Leandro Bay.

Lake Merritt is a 140-acre tidal estuary that receives its fresh water from five creeks, smaller streams, and 62 storm drains that carry rainwater from the Oakland hills and other neighborhoods. More information about the creeks can be found on the watershed pages for the Glen Echo Creek and Indian Gulch/Pleasant Valley Creek watersheds. The storm drains flow from residential neighborhoods surrounding the lake as well as from some of the busiest downtown areas, such as the Broadway Boulevard corridor between 14th Street and 20th Street.

The Lake Merritt Channel is a narrow, free-flowing waterway that connects Lake Merritt with the Oakland Estuary and San Francisco Bay. The channel was long impassable due to a culvert at one end and a 12-lane roadway at the other. On February 22, 2013, a 750-foot section was re-opened after 140 years by removing the 12th Street dam, culverts, pedestrian dams, and the 12-lane roadway. The 100-foot-wide free flowing channel is allows kayaks and other small craft to make their way from Lake Merritt to the estuary. Tidal marsh along the channel was restored by replanting where the dam had previously prevented the natural spread of marsh vegetation. The project also included a paved trail and pedestrian bridge.
Recreation

The San Francisco Bay Trail (Bay Trail) currently traverses 325 miles of the San Francisco Bay shoreline. Within the Oakland Estuary, the Bay Trail extends the length of Jack London Square to the Lake Merritt Channel. It begins again along the shoreline at Brooklyn Bay and ends just past Union Point Park. The trail then picks up just past the Park Street Bridge and continues to the High Street Bridge. Planners intend to eventually connect all sections of the trail, which will encircle the entire bay.

At the Tidewater Boating Center near the east end of the Oakland Estuary, boaters will find a launch site for the San Francisco Bay Water Trail system. These launch and landing sites, or “trailheads,” provide human-powered boats and beachable sail craft access to San Francisco Bay for multiple-day and single-day trips. This innovative trail system is designed for people with a variety of boating skills. The launch site at Tidewater Boating Center provides access to the Oakland Estuary and the more isolated San Leandro Bay, which is ideal for less experienced kayakers. Other launch sites are located in Jack London Square.

Lake Merritt lies just east of downtown Oakland and is home to a popular 3.1-mile (5 km) walking and jogging path that runs along its perimeter. The lake is surrounded by parkland and city neighborhoods. It is part of the Pacific Flyway and became the first US National Wildlife Refuge on March 18, 1870. Recreational activities also include bird watching and boating.

Lakeside Park is an Oakland city park between Grand Avenue and the Lake Merritt shoreline. The park includes an ecology area and provides bird watching opportunities near the five man-made islands where hundreds of shorebirds and waterfowl gather. The park also includes large lawns for picnics and sports, a small sandy beach, a bandstand, botanical gardens, and a small theme park for young children.

The 38-acre Middle Harbor Shoreline Park is located on bay fill at the west end of the Oakland Estuary surrounding the Middle Harbor Shoreline Basin. It is one of the few areas near the Port of Oakland’s shipping terminals where the shoreline is accessible to the public. More than two miles of pathways trace the basin shoreline and offer a vantage point for spectacular views of San Francisco Bay and the port’s giant cranes. The park includes an educational tower and historic and environmental interpretive signage. Parking is located off of Middle Harbor Road near 7th Street.

Estuary Park is a city park located on the Oakland Estuary shoreline at the mouth of Lake Merritt Channel. Much of the park area is devoted to athletic fields, but the park also includes amenities for enjoying the water. The Jack London Aquatic Center is located within the park as is a boat launch ramp, fish cleaning station, a pier, and paths to the water and the Bay Trail. Parking is available off of Embarcadero West near Oak Street. The Jack London Aquatic Center is operated by the Oakland Department of Parks and Recreation. It offers a number of water-oriented recreation programs that include sailing, kayaking, and water awareness classes and camps. The Estuary Park Renovation and Expansion Project aims to transform the waterfront to be a more great destination for all users in the region through improved access, improving the resiliency of the waterfront, restoring abitat, an programming for a year-round park destination.
Restoration

In February 2013, the City of Oakland removed a dam and tide gate that constricted and controlled the tidal channel of Lake Merritt. The re-opening of this 750-foot section of the channel allows tidal water to flow freely into the lake from the Oakland Estuary, thereby increasing circulation and improving water quality. Removing the dam has moved Lake Merritt closer to its historical state as a tidal estuary and has increased access for fish and wildlife that use this transition zone.In years past, hundreds of acres of tidal marsh on the Oakland shoreline were filled for military, port, and commercial uses. At the west end of the Oakland Estuary, the last two miles of shoreline are constructed from artificial fill. Middle Harbor Basin and Shoreline Park are entirely manmade features that served as berths for the Navy Fleet Industrial Supply Center. Between 2002 and 2004, as part of a larger Port of Oakland expansion project, the port and the U.S. Army Corps of Engineers removed the berths to construct Middle Harbor Shoreline Park and to transform Middle Harbor Basin into the Middle Harbor Enhancement Area. In the 180-acre site, dredged material was used to create shallow water habitat, specifically eel grass beds. Restoration of eel grass is still experimental, and this site provides an opportunity to study this restoration method and to monitor its success.To read about upstream restoration projects in other watersheds that drain to this catchment area, see the Glen Echo Creek and Indian Gulch/Pleasant Valley Creek watershed pages.
Get Involved

Information about volunteer and educational opportunities can be found by visiting these sites.
© 2022 Alameda County Flood Control & Water Conservation District