The Coyote Hills rise out of the San Francisco Bay marsh plain in Fremont between the Alameda Creek Flood Control Channel and the Dumbarton Bridge. The .4-square-mile West Coyote Hills Watershed extends along the ridge of the hills and drains their western slope directly to the now-diked former tidal marsh at its base. The watershed overlaps the Don Edwards National Wildlife Refuge and Coyote Hills Regional Park.

The Newark Slough Watershed drains 4.9 square miles of urban flatlands near the Dumbarton Bridge in Newark and part of Fremont into Newark Slough via a system of underground culverts and engineered channels. The slough winds its way through a system of salt pond levees to San Francisco Bay. 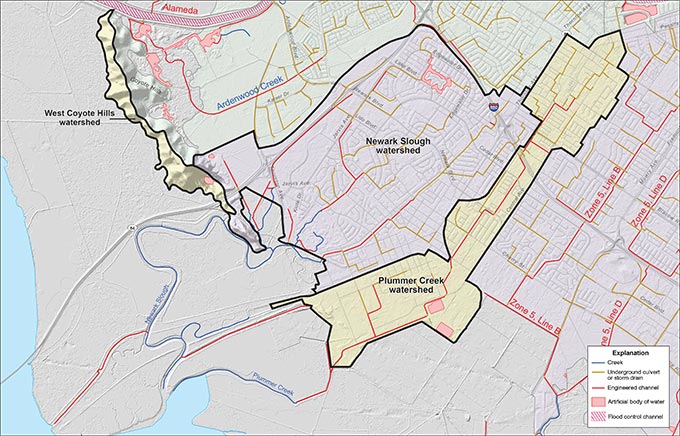 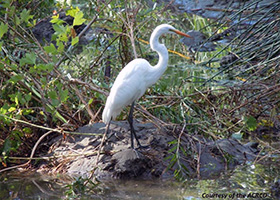 The Coyote Hills offers a good example of typical California grasslands. Two invasive plant species persist—fennel and mustard, both of which invade areas where the soil has been disturbed and excludes or prevents reestablishment of native plant species. In this case, the soil disturbance is most likely from dryland farming (farming without the use of irrigation). The two species can alter the composition and structure of plant communities and are continually being removed from Coyote Hills grasslands by East Bay Regional Park District staff and volunteers.The marsh plain below Coyote Hills and south into adjacent watersheds is dominated by salt ponds. The salt ponds near the mouths of Plummer Creek and Newark Slough get their red, purple, yellow, or black colors from microorganisms that live in the highly saline water—a common characteristic of salt ponds, the colors change as population density of certain microorganisms increase. The most highly saline salt evaporation ponds have a greater density of microorganisms that color the ponds. Salt pond colors can also vary by season. Generally the colored ponds, such as those in the Plummer Creek and Newark Slough watersheds, have higher salinity and density of microorganisms and less species diversity than lower saline ponds. The varying salinity conditions within the overall salt pond mosaic have existed since the 1800s, and data suggests that some bird species now present in San Francisco Bay were attracted here by the salt pond habitat.

The Coyote Hills are composed of Franciscan complex rocks (named for San Francisco), which include a melange of sandstone with smaller amounts of shale, chert, limestone, and conglomerate. The Franciscan formation is one of the major geologic units in California, ranging in age from the late Jurassic to middle Cretaceous periods. Similar isolated occurrences of Franciscan formations in the Bay Area include the Albany Bulb, San Mateo Point, Yerba Buena and Angel Islands, and Potrero de San Pablo in Richmond. Generally Franciscan rocks are stable with respect to settlement and a relatively rigid response to earthquakes. The hills are surrounded by tidal marshland and alluvial flood-plain sediments that extend along the bay margins and include the marsh plains of Newark Slough and Plummer Creek watersheds. For a discussion of the formation of tidal marshes in the nearby Johnson Landing and Mt. Eden Creek Watersheds and generally in South San Francisco Bay, click here.

In much of the South Bay, salt ponds have subsided due to groundwater extraction from the 1850s through the early 1900s. Restoring deeper ponds to tidal marsh is difficult due to the amount of sediment that must be imported to raise the elevation up to the marsh plain and the varying degrees of sediment contamination. This problem along with divergent stakeholder interests within these three South Bay watersheds make restoring salt ponds challenging.
Waterbodies 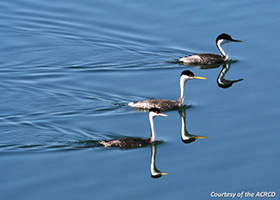 The West Coyote Hills Watershed drains the grass-covered western slope of Coyote Hills, from the ridge to the diked former tidal marshes at its base. There are no engineered channels and no storm drains. The western slope has remained relatively unchanged over the past 150 years. The former tidal marshes at the base of the hills were diked to create salt evaporation ponds for commercial salt production.

Newark Slough is fed by underground culverts and engineered channels from the Alameda County Flood Control and Water Conservation District’s Zone 5, located in Newark and Fremont. The slough carries estuarine water as far as the restored La Riviera Marsh at the south end of Coyote Hills. It winds around salt pond levees on its way toward Dumbarton Point, then makes a U-turn and enters San Francisco Bay near Plummer Creek. An unnamed engineered channel leads from the U-turn out to the tip of Dumbarton Point.

Sanjon de los Alisos is an old distributary of Alameda Creek. The old creek bed, which is no longer visible, originated between the easterly projection of Thornton Avenue and Peralta Boulevard in Fremont. This creek would carry floodwaters of Alameda Creek through the Newark Slough watershed to San Francisco Bay. The creek is now entirely underground, renamed, and it flows into Newark Slough.

Plummer Creek would have been more appropriately named Plummer Slough as it was a tidal marsh slough that formerly did not receive fresh water. Now, it carries runoff from an engineered channel along a long narrow portion of Zone 5. On its way to the bay, Plummer Creek flows through some higher saline ponds, which can be identified in aerial photos by their pinkish color. When Cargill Salt sold the South Bay Salt Ponds for restoration purposes, it retained the right to produce salt in the ponds near Plummer Creek.
Recreation 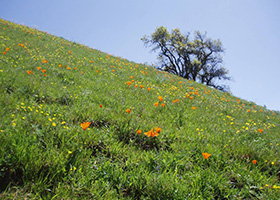 Located within Coyote Hills Regional Park, the Bay View Trail begins at its intersection with the Alameda Creek Trail and runs south along the western slope of the hills, affording completely unobstructed views of San Francisco Bay. The trail circles back along the east side of the hills and connects with the Apay Way Trail, continuing south to the Don Edwards San Francisco Bay National Wildlife Refuge. Also beginning at the Alameda Creek Trail, the Red Hill Trail extends south along the ridge of Coyote Hills, offering views west to the bay and east to DUST Marsh and the East Bay hills.

The East Bay Regional Park District’s 978-acre Coyote Hills Regional Park was dedicated for public use in 1967. Today it is a popular place for hiking, bicycling, and bird watching. The park is rich in Native American history, boasting a 2,000-year-old Tuibun Ohlone village and shellmound sites. The village contains an Ohlone-style family house, sweat house, and shade shelter that are open for guided tours with reservations. The park can be reached via Patterson Ranch Road in Fremont.

Standing on levees at the edge of San Francisco Bay looking east, the Coyote Hills appear as an island rising out of the flat marsh plain. West of the hills are the baylands, a series of managed ponds with some tidal marsh and tidal flats, seasonal wetlands, and uplands that are part of the 30,000-acre Don Edwards San Francisco Bay National Wildlife Refuge. This vast wetland preserve extends from Coyote Hills south, past Dumbarton Point and through the South Bay. The refuge is home to 227 bird species and supports 45,000-75,000 wintering waterfowl each year. Miles of trails run along the crests of the old dikes. The Visitor Center, located near the southeast edge of Coyote Hills Regional Park, provides trail maps and nature guides.
Restoration 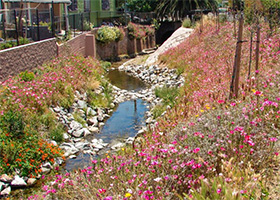 La Riviere Marsh in the Don Edwards San Francisco Bay National Wildlife Refuge is one of the best examples of tidal salt marsh restoration in the San Francisco Bay area. Located on Marshlands Road in Fremont, this tract of land was used for industrial salt production for many years. When the U.S. Fish and Wildlife Service refuge was created in the early 1980s, refuge managers decided to convert the salt ponds back into tidal salt marsh. The restoration effort was primarily passive, involving digging holes in levees to let the Bay tides in and letting nature take its course. The result has been the creation of a high quality salt marsh habitat suitable to support local resident and migratory species, including the endangered salt marsh harvest mouse and the California clapper rail. Restoration of the upland edges of the marsh has not been as successful. Invasive plants dominate these edges, degrading the habitat for native plants and animals. The refuge continues its efforts to restore and maintain these plant communities.
Get Involved 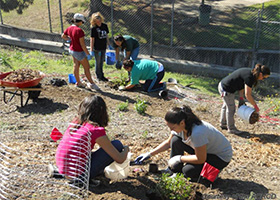 There are several organizations that fund or provide watershed education programs and opportunities for getting involved in restoration efforts. The list below includes some of the major organizations coordinating work in the watersheds and those providing volunteer and educational programs. Many additional links to volunteer and educational opportunities can be found by visiting these sites.