Located in Newark and Fremont, the 12.8-acre Mowry Slough Watershed drains through culverts and engineered channels from the base of the East Bay hills to a system of stormwater treatment wetlands called Tule Ponds at Tyson Lagoon and through the gently sloping urban plain toward South San Francisco Bay. Nearly 15 miles of this drainage runs through aboveground engineered channels. The channels drain to Mowry Slough, which winds around Cargill Salt’s crystallizer ponds across the bay marsh plain. San Francisco Bay’s most productive harbor seal rookery is located on the banks of Mowry Slough. 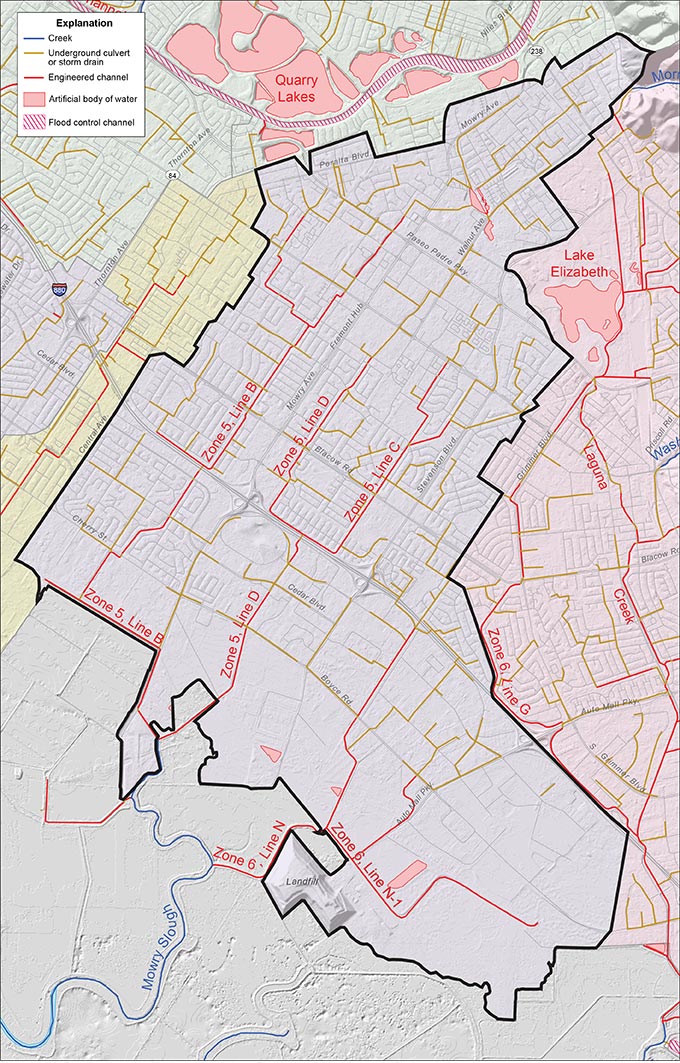 The Tule Ponds at Tyson Lagoon offer a naturalized park setting in a mostly urban landscape. The area is primarily native trees, shrubs, and herbaceous plants such as bay laurel, coyote brush, and mugwort. A number of fish species live in the ponds, including mosquito fish, largemouth bass, and sunfish. In the entire upland portion of the watershed, the ponds provide the only view of water drainage in a naturalized setting.

Closer to the bay, Mowry Slough meanders across the marsh plain. The area south of the slough is mostly tidal marsh and salt ponds, and to the north are crystallizer salt ponds, which are some of the most saline. The area is home to hundreds of bird species and is a stopover for 45,000-75000 wintering waterfowl each year. The salt production process and wildlife in this area are described in a report by the Bay Conservation and Development Commission. As one of the deeper channels in San Francisco Bay, with few opportunities for human disturbances, Mowry Slough is an ideal location for harbor seals. They are protected from sharks, have plenty of food, and use the marshland for pupping. Mowry Slough is one of the most productive rookeries in San Francisco Bay.

Uplift on the east side of the Hayward Fault created the East Bay hills. This strike slip fault runs southwest to northeast across Alameda County’s entire western side. Within the Mowry Slough watershed, the fault created a scarp, and water collected in the remaining depression to create a sag pond that later became Tyson Lagoon. Today culverts feed the Tule Ponds at Tyson Lagoon and drain it, carrying water under the floodplain of historic Alameda Creek. For thousands of years, the floodwaters of Alameda Creek deposited sediment in a large fan-shaped deposit, or alluvial fan, that spread from Niles Canyon west to San Francisco Bay, north to Union City, and south through the cities of Fremont and Newark. Through the early 1900s, this expanse of silty and sandy soils made for productive farming well into the area that is now part of the Mowry Slough Watershed.

Historically Mowry Slough was a tidal slough to which no creeks drained. The marsh plain surrounding the slough formed over the last 4,000 years as slowly rising sea levels inundated the bay shoreline. The accumulation of sediment and organic material like peat prevented tidal marshes from becoming completely inundated. Tidal marshes along the gradually sloped South Bay shoreline moved inland as sea levels rose, creating vast tidal flats and vegetated tidal marsh plains drained by a system of sinuous channels, such as Mowry Slough. During storm events, tidal marshes increase the flood carrying capacity of local creeks, flood control channels, and rivers by scouring the mouths of these waterways. They act like giant sponges soaking up water and slowly releasing runoff back into the bay.

In much of the South Bay, salt ponds have subsided due to groundwater extraction from the 1850s through the early 1900s. Restoring deeper ponds to tidal marsh is difficult due to the amount of sediment that must be imported to raise the elevation up to the marsh plain as well as varying levels of sediment contamination. These problems, along with divergent stakeholder interests within the South Bay’s Mowry Slough, Plummer Creek, and Newark Slough watersheds, make restoring the slough and marsh challenging.

Located on the Hayward Fault adjacent to the Fremont BART Station, Tyson Lagoon is a former sag pond that was expanded in 1998 to create a wetland-based stormwater treatment system. The Alameda County Flood Control and Water Conservation District excavated a seasonal, water-filled depression adjacent to the lagoon to create three connected ponds designed to filter the water progressively as it flows from the urban plain. The 17-acre site is also used to teach hydrology and geology to local students.

West of the Hayward Fault, underground culverts drain water to three main engineered channels: Lines B, C, and D. Some channels are made from concrete and others are created by earthen levees. Line C runs alongside Kennedy High School on Blacow Road, where an old creek channel is buried beneath the school building.

Historically one of the deepest sloughs in South San Francisco Bay, Mowry Slough meanders through the tidal marsh bounded by colorful salt ponds. It is named for Origin Mowry who, in the mid-1800s, owned over 400 acres of farmland in the area and used the slough to transport goods and people by boat. Mowry Slough is located in the Don Edwards San Francisco Bay National Wildlife Refuge and is accessible only by boat. Being so isolated, it is an ideal home for harbor seals, which are easily disturbed by human activities. A healthy population of harbor seals thrives there, raising their young and sunbathing on the banks of the salt marsh.

The San Francisco Bay Trail (Bay Trail) is planned to someday traverse the entire shoreline of the bay. It is a work in progress, and in the area surrounding Mowry Slough it is still in the planning phases. For now, Bay Trail access is at Willow Road and Thornton Avenue to the north and at Cushing Road to the south. Both locations offer spectacular views of the extensive salt ponds and tidal marsh.

Located on 17 acres, the Tule Ponds at Tyson Lagoon Wetlands Center provides interpretive signage and educational opportunities for school-age children. The wetlands are both natural and manmade and designed to filter stormwater. The site is located on the Hayward Fault, and many hydrological, geological, and natural resource features make it a great location for hands-on education.

Mowry Slough drains through the 30,000-acre Don Edwards San Francisco Bay National Wildlife Refuge. This vast wetland preserve extends from Coyote Hills south, past Dumbarton Point and through the South Bay. The refuge is home to 227 bird species and supports 45,000-75,000 wintering waterfowl each year. Miles of trails run along the crests of the old dikes located north and south of the Mowry Slough Watershed. However, the only access to Mowry Slough is by boat. Boaters and kayakers within Mowry Slough should be aware that harbor seals haul out along the shoreline. Visitors should take precautions to avoid disturbing these shy animals by staying 100 yards away and moving further away if their presence affects the animals’ behavior.

Restoration within the Mowry Slough Watershed poses a significant challenge. There are no longer any natural creeks, but there are a few places within the upland portion of the watershed along Blacow Road near Kennedy High School where sections of creek channels can be seen. Today all water is carried through culverts and engineered channels to Mowry Slough. Due to subsidence in the salt ponds surrounding the slough and varying stakeholder interests in the area, restoration of salt ponds surrounding the slough is challenging. The Tule Ponds at Tyson Lagoon stand out as a restoration success. This project, conducted by the Alameda County Flood Control and Water Conservation District, created a series of ponds adjacent to a natural sag pond to create a natural water filtration system through which stormwater gets progressively cleaner as it travels. The site is planted with native plants and managed for educational purposes by the Math/Science Nucleus.
Get Involved