The 660-square-mile Alameda Creek Watershed is the largest watershed in the Bay Area. It extends as far south as Mount Hamilton, north to Mount Diablo, east to the Altamont Hills in Livermore, and west to San Francisco Bay. The information in this watershed page focuses on the Lower Alameda Creek Watershed. This portion of the watershed makes up just 6 percent of the total watershed area and is located in western Alameda County within the Alameda County Flood Control and Water Conservation District’s (the District) jurisdiction. This 41-square-mile portion includes the Walpert Ridge area of the East Bay hills and the flatlands of Fremont and Union City. The flatlands were created by Alameda Creek itself, each successive flood laying down another layer of sand, silt, and gravel to form a large alluvial fan that slopes gently bayward.Downloads: Overview map (PDF) | Lower Alameda Creek Watershed map (PDF)
Features 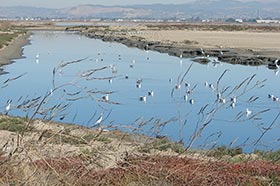 The Agua Fria Watershed drains through Miocene epoch sedimentary rock on the west side of the Diablo Ridge and then through Pleistocene epoch sediments to I-680. The drainage is directed into culverts under I-680, which parallels the Hayward Fault. During the Pleistocene epoch, a large river flowed through this area to what is now south San Francisco Bay. Movement along the Hayward Fault interrupted the river flow, creating many creeks. In the last several thousand years, these creeks flowed to the bay across a wide marsh plain thick with vegetation and branching waterways. The process that formed south San Francisco Bay tidal marshes is explained in detail in the Mowry Slough section.

Water contamination levels in the Agua Fria Watershed are consistent with urban areas in the region. Mercury, PCBs, and PBDEs are the greatest concerns, while dioxins, pyrethroids, PAHs, and selenium are also problematic. Though overwhelming evidence demonstrates the potential of tidal marshes to improve water quality, the large-scale restoration activities in the South Bay may have their own adverse water quality impacts. These are detailed in a study by the San Francisco Estuary Institute. In the course of the restoration effort, the potential impacts are identified, mitigated where possible, and addressed through an adaptive management approach.
Waterbodies 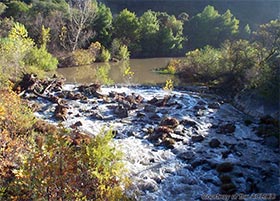 (The following information pertains to the Lower Alameda Creek Watershed within the jurisdiction of Alameda County Flood Control and Water Conservation District – from the mouth of Niles Canyon to San Francisco Bay.)

Zone 5, Lines J2 and J3 drains a 1.9-square-mile subwatershed in a residential area of Union City near the managed ponds and wetlands of south San Francisco Bay. A series of culverts drain to an engineered channel that joins the ACFC Channel.The shallow waters of south San Francisco Bay provided excellent conditions for the extensive tidal flats and tidal marshes that rimmed the shoreline. These same conditions made the south bay an excellent place for salt farming. Small scale salt production was a traditional activity of the Ohlone Native Americans, the Spanish, and early American settlers. From the mid-1800s through the late 1900s, salt production expanded to include large industrial ponds that transformed the south bay tidal flats and tidal marshes. In 2003, most of the salt ponds were purchased for restoration and are now part of the South Bay Salt Pond Restoration Project managed by the California Coastal Conservancy. Due to natural subsidence and that induced by salt production, many of these ponds will remain behind levees as either restored areas, managed tidal marshes, or managed ponds, all of which provide valuable habitat.
Recreation
Recreational Opportunities

(The following information pertains to the Lower Alameda Creek Watershed within the jurisdiction of Alameda County Flood Control and Water Conservation District – from the mouth of Niles Canyon to San Francisco Bay.)

The Alameda Creek Regional Trail extends 12 miles along the levee of the Alameda Creek Flood Control (ACFC) Channel from the mouth of Niles Canyon in Fremont to San Francisco Bay. The trail connects with Quarry Lakes Regional Recreation Area, Coyote Hills Regional Park, and the Don Edwards San Francisco Bay National Wildlife Refuge. Used most by cyclists, the entire trail along the south side levee is paved, including a loop that circles Coyote Hills.

During the mid-19th century, the gravel deposits of Alameda Creek were mined in the area that is now Quarry Lakes Regional Recreation Area. Among other projects, the gravel was used in the construction of the transcontinental railroad. The leftover pits were later reclaimed by the Alameda County Water District for groundwater recharge. Today the Quarry Lakes cover 350 acres of the 471-acre recreation area, which is managed by the East Bay Regional Parks District (EBRPD). Boating, swimming, and fishing are popular activities. The recreation area is located on Quarry Lakes Boulevard in Fremont.

Operated by the city of Fremont, Niles Community Park contains three ponds in former gravel quarry pits adjacent to Quarry Lakes Regional Recreation Area. Located at 472 School Street, the park allows fishing and picnicking. The area in and around Shinn Pond is used as an off-leash dog park.

Managed by the EBRPD, Garin and Dry Creek Pioneer Regional parks share a contiguous border, together forming a 4,763-acre area in the hills behind California State University East Bay. The north fork of Dry Creek runs through Garin Regional Park and the south fork runs through Dry Creek Pioneer. Within the two parks, there are 20 miles of unpaved paths and two ponds. Jordan and Newt ponds were created by damming the north fork of Dry Creek. Today anglers fish the ponds for bass, bluegill, sunfish, and stocked catfish. Garin Regional Park sits on the former site of Garin Ranch, owned by Andrew Garin, who maintained large tracts of apple orchards. The ranch was sold to the EBRPD in 1966, but some of the antique apple varieties are still farmed today and celebrated at the annual Garin Apple Festival. A visitor center within Garin Park highlights the rich history of the area. Dry Creek Pioneer Regional Park sits on the former site of Dry Creek Ranch, which was owned by three sisters, Mildred, Edith, and Jeanette Meyers. During the 1950s and 1960s, the philanthropic Meyers sisters hosted fundraising events at the ranch. They eventually donated the 1,200-acre property to EBRPD in 1979 to prevent a freeway from bisecting it. The family cottage and Dry Creek Garden are preserved there today.

The Ardenwood Historic Farm occupies the site of the Patterson family home and their successful farm from the 1850s. Historic Ardenwood Creek flowed through the farm, draining Alameda Creek floodwaters that, for thousands of years, deposited fertile farming soils in the area. Since 1985, the EBPRD and the city of Fremont have managed the site as a functioning turn-of-the-century farm and restored Victorian mansion. A docent program allows visitors to tour the mansion or participate in seasonal farming activities. The farm also supports the largest overwintering population of monarch butterflies in the Bay Area. A eucalyptus stand, along with EBRPD-maintained milkweed, keeps the monarchs here most years from December through February.

Standing on San Francisco Bay levees looking east, the Coyote Hills appear as an island rising out of the flat Alameda Creek floodplain. West of the hills are the baylands, a series of managed ponds that are part of the Don Edwards San Francisco Bay National Wildlife Refuge. To the east are freshwater wetlands filled with water from Crandall and Ardenwood engineered creek channels. The EBRPD’s 978-acre Coyote Hills Regional Park was dedicated for public use in 1967. Today it is a popular place for hiking, bicycling, and bird watching. The park boasts a 2,000-year-old Tuibun Ohlone village and shellmound sites. The village contains an Ohlone-style family house, sweat house, and shade shelter that are open for guided tours with reservations. The park can reached via Patterson Ranch Road in Fremont.

The ACFC Channel feeds into the northern extent of 30,000-acre Don Edwards San Francisco Bay National Wildlife Refuge. The baylands within the refuge consist primarily of tidal marsh, managed ponds, and mud flats. A smaller portion of the refuge includes seasonal wetlands and uplands. The refuge is home to 227 bird species and supports 45,000-75,000 wintering waterfowl each year. The refuge is also one of several entities partnering in the South Bay Salt Pond Restoration Project.

The north levee of the ACFC Channel borders the 5,050-acre Eden Landing State Ecological Reserve. The reserve is undergoing restoration as Phase I of the South Bay Salt Pond Restoration Project. The public access opportunities and restoration effort at Eden Landing are described in depth here.
Restoration 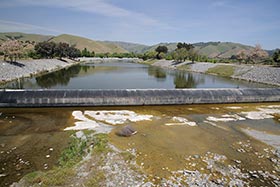 The restoration of ocean-run steelhead trout began in 1999 as a collaborative effort between the Alameda County Flood Control and Water Conservation District and several other agencies. It has been an extensive, ongoing project involving the removal of three dams and the construction of fish passage structures such as fish ladders. Stream flows will be improved for cold water fish, and habitat along the flood channel will be restored. With the completion of these projects, anadromous fish will be able to access up to 20 miles of spawning and rearing habitat in Alameda Creek and its tributaries.

The 15,100 acres of industrial salt ponds in south San Francisco Bay will be restored through the South Bay Salt Pond Restoration Project, the largest tidal wetland restoration project east of the Mississippi River. The baylands at the outflow of ACFC Channel are included within this area. Their restoration will create a diverse habitat of tidal marsh and managed ponds for fish, waterfowl, and other wildlife. Phase I of the project restored Eden Landing at the mouth of Old Alameda Creek, just north of the ACFC Channel. As part of Phase II, levees will be modified near the lower reach of Alameda Creek to help create new tideland areas. Bay tides flowing in and out of the lower segment of Alameda Creek will scour sediment that might otherwise require dredging. The restoration of tidal marsh habitat is crucial to the survival of salmonids and marsh-dependent fish. Consequently, groups like the Alameda Creek Alliance are working to ensure that the salt pond restoration compliments the restoration of steelhead in Alameda Creek.

This project covered eight full blocks in the neighborhood between 12th and 15th Streets and F and H Streets. It addressed storm drainage concerns and beautified the area by replacing old, flood-prone infrastructure with raingardens, permeable pavers and planted curb extensions. The project utilized low-impact best management practices to promote infiltration, provide temporary detention, and treat stormwater draining to Alameda Creek and its habitat. It transformed the streetscape with tree-lined, pedestrian-friendly space for community members and protects Alameda Creek from water pollution and high peak flows.
Get Involved

The organizations below provide resources, education programs, and volunteer opportunities in the watershed.