The 3.5-square-mile Lion Creek Watershed lies in the city of Oakland. The watershed begins on the west side of the Oakland hills and runs west to San Francisco Bay, narrowing as it passes through flatter land. The eastern boundary of the watershed roughly follows Skyline Boulevard where it borders the San Leandro Creek Watershed. The watershed includes three creeks: Chimes, Horseshoe, and Lion. The former Leona tributary, now part of Lion Creek, drains an abandoned sulfur mine. Horseshoe and Chimes creeks both discharge into Lion Creek, which empties into Lake Aliso on the Mills College campus. From there the creek enters a series of engineered channels and underground culverts that continue to San Leandro Bay within the larger San Francisco Bay. 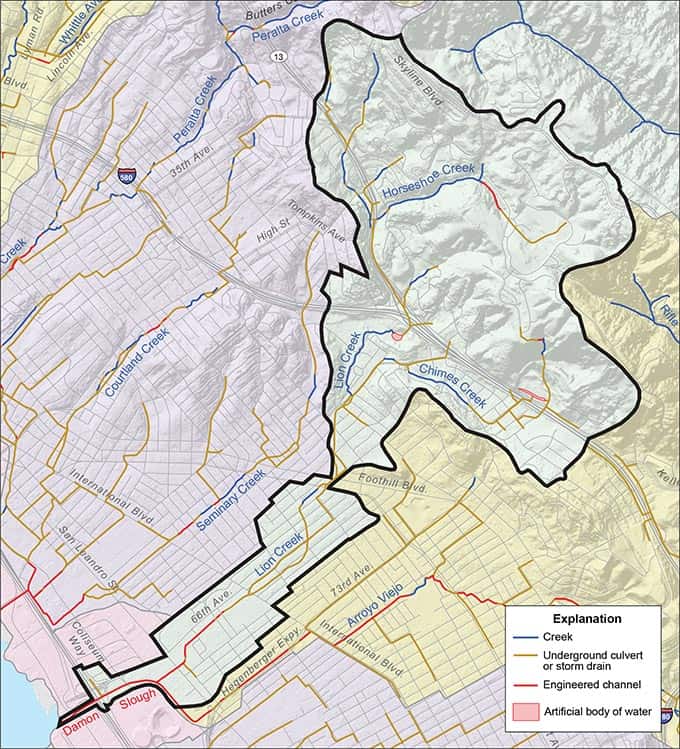 Lion Creek and its tributaries historically provided habitat for native amphibians, fish, and other aquatic organisms. Poor water quality, culverting, and altered hydrology have devastated these populations in the western, more urban portion of the watershed. The headwaters in the Oakland hills continue to support a variety of animals including mule deer, Californian vole, and the Sierran treefrog. Some of the plants commonly found in this area include coast live oak, maiden hair fern, and California poppy. A list of species found in Leona Canyon, a large open space that typifies the watershed, can be found here.

Powerful geologic processes, such as uplift, earthquakes, and mass wasting, created the Lion Creek Watershed. The eastern portion is largely within the Oakland hills and is crossed by the Hayward Fault, which runs just west of I-580. The western portion of the watershed sits on an alluvial fan–a fan-shaped deposit of water-transported material (alluvium) that typically forms at the base of hills or other topographic features where there is a marked change in slope. These alluvial soils are composed of layers of sand, gravel, silt, and clay eroded from the nearby hills.

As with many urban areas, surface runoff carrying potentially harmful pollutants, such as fertilizers, pesticides, animal waste, heavy metals, gas and oil, and other contaminants, is a major resource concern. The creek also transports a significant amount of litter to the shoreline and bay, particularly lightweight plastic products like food wrappers and drink containers that enter through connected storm drains. Unique to Lion Creek is a problem caused by the Leona Heights Sulfur Mine, a mine in the Oakland hills that was active from the 1890s to 1934. A tributary that flows from the old mine has been carrying contaminants downstream for decades. In February 2014, it was announced that the owner would be paying for cleanup and encapsulation to help prevent runoff of acid and metals into Lion Creek. Work began during the summer of 2014. More information on this issue can be found in the Regional Water Quality Control Board’s Staff Summary Report.
Waterbodies

Lion Creek begins on the western slope of the Oakland hills as a series of small springs and tributaries. Chimes Creek and Horseshoe Creek are the only officially named tributaries. The watershed contains a network of open creeks, engineered channels, and underground culverts. The Leona Quarry, located in the southeast corner of the watershed, and Lake Aliso at Mills College are both retention ponds proximate to Lion Creek and its tributaries.

Chimes Creek originates in the Oakland Hills in a large metal pipe that carries the water down the hillside and under I-580. The creek daylights behind residential properties on Delmont Avenue before dropping underground to cross Seminary Avenue; it then briefly surfaces on the Mills College campus. Chimes Creek then merges with Lion Creek to flow into San Francisco Bay.

Horseshoe Creek begins in a small but dramatic gorge—Horseshoe Canyon—cut into the Oakland hills between Holy Names College, Merritt College, and Mills College. Today the canyon is preserved within Leona Heights Park, but in former times it was logged, mined, then quarried. Large stumps remain from the original San Antonio redwood grove, where second-growth redwoods have replaced the ancient trees. Mine tailings stain the creek below the old sulfur mine, and the quarry scar sits in the undeveloped scrub at the north end of Merritt College. A former branch of Horseshoe Creek was filled to create land for Merritt College, where culverts and engineered channels now drain this part of the watershed.

Lion Creek drains Leona Canyon in the Leona Heights and Crestmont neighborhoods of Oakland as well as the former Leona Quarry. It runs through Mills College, past Evergreen Cemetery, and into the bay at 66th Avenue. Part of its headwaters comes out of a former pyrite mine at the end of McDonell Avenue causing higher acidity and giving the creek an orange hue. The creek is open through the Mills College campus before entering a culvert; it then daylights briefly between Avenal and Bancroft avenues before following channels and culverts to the bay.

Lake Aliso is a flood control pond located on the Mills College campus that, when full, creates a habitat for water birds. Horseshoe Creek discharges into Lion Creek, which empties into the lake. Historically (pre-1990) lake levels were maintained year-round. Currently the lake alternates between full and empty. In summer, a full lake provides irrigation water to the college; in winter Aliso is drained for flood protection.

Located in the headwaters of Chimes Creek, this old quarry site has recently been converted to housing. Rainwater runs off the terraced slope via a complex network of concrete V-ditches and pipes. The network converges at a long detention basin beside the freeway where the water passes through a filter to remove sediment before entering a pipe and flowing under the freeway and eventually into Chimes Creek. In addition to slowing the release of heavy winter rains, the detention basin provides a small wetland habitat for plants and animals throughout the year.

San Leandro Bay is an arm of the San Francisco Bay, located along the east side of the Oakland International Airport and Bay Farm Island. Once a rich habitat for wildlife, most its original marshland and habitat have been filled or dredged. See Arrowhead Marsh on the East Bay Regional Parks website to find a map of the remaining area of these tidal marshes.
Recreation

Those looking to explore the watershed will find several trails and parks accessible to the public for walking, biking, and recreation.

Located in the Martin Luther King Jr. Regional Shoreline, these trails intersect at the engineered channel draining Lion Creek and Arroyo Viejo and offer views of Damon Marsh. Trails are open for walking and biking throughout the year during daylight hours.

Martin Luther King Jr. Regional Shoreline, located off Doolittle Drive and Swan Way in Oakland, is a 741-acre park leased from the Port of Oakland and operated by the East Bay Regional Park District. The park was established to protect the remainder of a once-extensive marshland at San Leandro Bay. The remaining marshland includes Damon Slough where the water from both Arroyo Viejo and Lion Creek enter San Leandro Bay. San Leandro Creek and Peralta Creek also enter the bay through the shoreline. The marshland found along San Leandro Bay attracts numerous migratory shorebirds and offers excellent bird watching opportunities among a network of walking and biking trails, picnic areas, and fishing spots. The park is open year-round during daylight hours.

Leona Heights Park is operated by the City of Oakland. The two main entrances to the park are located at 4444 Mountain Boulevard near the Leona Lodge and at 12500 Campus Drive across the street from Merritt College. The park offers a network of hiking trails and is open year-round during daylight hours.

A 290-acre parkland near Merritt College, Leona Canyon Regional Open Space Preserve is accessible from a staging area on Campus Drive off Keller Avenue east of I-580 in Oakland. The park was developed to protect the wooded Leona Canyon for recreation and natural interpretation. While the bulk of the park lies in the Arroyo Viejo Watershed, its far western edge is part of the Lion Creek Watershed. The park offers a network of hiking trails and is open year-round during daylight hours.
Restoration 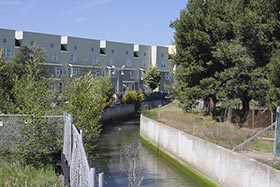 Completed in 2010, the Lion Creek Restoration Project created 1.5 acres of creek and wetland habitat for fish, birds, and other wildlife. The project is less than a mile from the Martin Luther King Regional Shoreline and Arrowhead Marsh, important stopping points for migrating birds. Located in the redeveloped Lion Creek Crossings Park, between 66th and 69th avenues at San Leandro Street, it is surrounded by new, mixed-use housing units developed by the Oakland Housing Authority. Click here for more information.
Get Involved

Several organizations fund or provide free watershed education programs and resources for residents and teachers in the Lion Creek Watershed. Please review the list of organizations below that provide educational opportunities for the public or coordinate work in the watershed. Many additional links to volunteer and educational opportunities can be found by visiting these sites.
© 2022 Alameda County Flood Control & Water Conservation District
Skip to content