The Mt. Eden Creek and Johnson Landing watersheds share a contiguous border along Highway 92 in a light industrial area of Hayward. The small upland areas of the watersheds drain through underground culverts under an inland levee that separates them from a system of industrial salt ponds and wetlands along the bay shoreline known as the baylands. Most of the area within these two small watersheds is part of the baylands, where extensive progress is being made toward restoring tidal marsh and managed wetland habitat while continuing to provide flood control and adapt to rising sea levels.

South of Highway 92 within the .7-square-mile Mt. Eden Creek Watershed lies Eden Landing Ecological Reserve. Mt. Eden Creek was formerly a tidal slough that wound its way through what is now the reserve but was cut off from the surrounding tidal marsh with construction of the salt pond levees.

The .3-square-mile Johnson Landing Watershed lies north of Highway 92 and houses the southern portion of Hayward Regional Shoreline Park, which includes Hayward Marsh and the Hayward Shoreline Interpretive Center. The park is an excellent gateway for exploring the tidal marshes and managed wetlands along the shoreline. 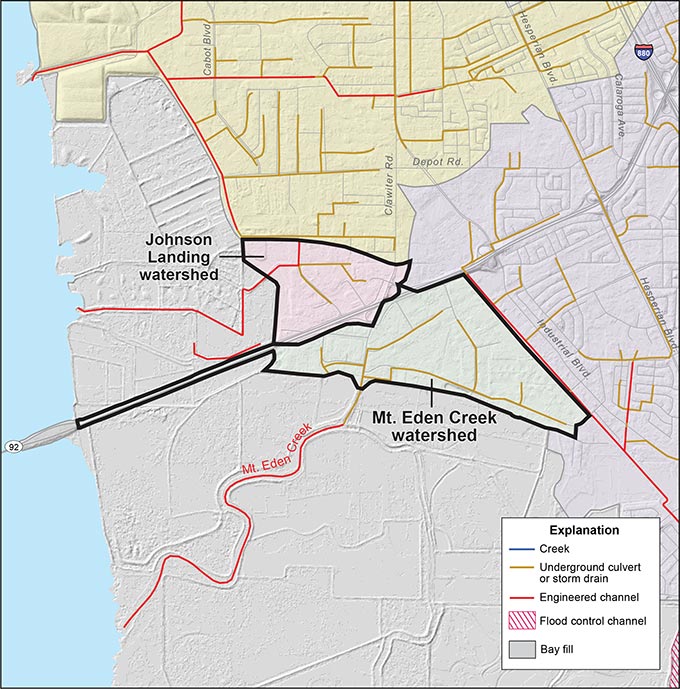 Mt. Eden Creek drains a small industrial area of Hayward south of Highway 92 near the San Mateo Bridge. It extends east to the Union Pacific Railroad tracks and south to Arden Road. A system of culverts drains to Mt. Eden Creek, which makes its way through the baylands in Eden Landing Ecological Reserve. North of Highway 92, Johnson Landing Watershed drains a slightly smaller industrial area through culverts that join at Johnson Landing Canal. This engineered channel leads to San Francisco Bay, cutting a jagged line westward through the baylands at Hayward Marsh within Hayward Regional Shoreline.

The historic shoreline of South San Francisco Bay was dominated by tidal marshes and tidal flats, many of which were converted to salt ponds in the late 1800s. Salt grass, pickleweed, and cord grass were the dominant plant species. With the conversion to salt ponds, many waterfowl species adapted to feed on the plentiful brine shrimp in the highly saline water and to nest on islands within the ponds and levees. The Western snowy plover, a federally listed threatened species, is a particular example. Although the snowy plover now breeds in salt ponds, it probably did not breed in San Francisco Bay prior to the salt pond conversion. The American avocet and black-necked stilt also began breeding in the bay after intensive salt production began. Through the South Bay Salt Pond Restoration Project, tidal marsh will be restored and ponds at varied salinities will be managed to ensure that the right habitat is available for nesting and migratory shorebirds and waterfowl.

The tiny triangular Johnson Landing and Mt. Eden Creek watersheds drain across creek sediments deposited over thousands of years by San Lorenzo and Sulphur creeks. The watersheds open to vast intertidal wetlands along San Francisco Bay that formed over the last 4,000 years as slowly rising sea level inundated the bay shoreline. The accumulation of sediment and organic material, such as peat, prevented tidal marshes from becoming completely inundated. Tidal marshes along the gradually sloped South Bay shoreline moved inland as sea level rose, creating vast tidal flats and vegetated tidal marsh plains drained by a system of sinuous channels, such as Mt. Eden Creek. During storm events, tidal marshes increase the flood carrying capacity of local creeks, flood control channels, and rivers by scouring the mouths of these waterways. They act like giant sponges soaking up water and slowly releasing runoff back into the bay. Restoring the marshes in Johnson Landing and Mt. Eden Creek watersheds is part of a large effort to protect the shoreline from floods as the rate of sea level rise increases with climate change.

As they drain primarily urban areas, Johnson Landing and Mt. Eden creeks are entirely underground east of the bay wetlands. As such, they lack sediment, vegetation, and sunlight, all of which are necessary to sustain a creek ecosystem. At their outflows in the managed wetlands and tidal marshes along the bay margins, the Mt. Eden Creek and Johnson Landing engineered channels have been restored. Despite the marsh restoration, beautiful park setting, and signage between the shoreline and wetland edges, littering and illegal dumping still take place. Trash removal creates additional financial costs for the agencies managing the shoreline: the East Bay Regional Park District (EBRPD), Hayward Area Shoreline Planning Agency, and the State of California.
Waterbodies

Johnson Landing Engineered Canal drains a triangular portion of an urban neighborhood on the north side of Highway 92 near the edge of the Hayward Regional Shoreline. Underground culverts carry water to the canal, which drains through Hayward Marsh to San Francisco Bay near the patch of slightly higher ground known as Johnson Landing. Historically the Johnson Landing docks served as an embarkation point for passengers, salt, and agricultural products from the East Bay going to San Francisco. In the mid-1800s, John Johnson built levees in the area to create the first commercial salt production ponds in the bay. The trail from the Hayward Shoreline Interpretive Center leads across the outboard levee to Johnson Landing, but no traces of the docks remain.

Hayward Marsh is a 145-acre fresh water and tidal marsh within the Hayward Regional Shoreline. The marsh has five managed ponds and 15 islands for the abundant nesting shorebirds and waterfowl. It was formerly a salt evaporation pond that was restored in 1985. The marsh relies on secondary treated effluent as the fresh water source. Fresh water is diverted from the Union Sanitary District through a force main operated by the East Bay Discharge Authority that carries effluent into deep waters of San Francisco Bay. Today the marsh provides natural and effective water quality treatment before the diverted effluent is discharged.

Culverts that lead to Mt. Eden Creek in Eden Landing Ecological Reserve drain a small triangular area south of Highway 92. Mt. Eden Creek was a tidal slough that was disconnected from surrounding wetlands with the construction of industrial salt pond levees in the 1800s. During the restoration of wetlands in Eden Landing, Mt. Eden Creek levees were breached in several places, reconnecting the creek with surrounding restored tidal marsh and reconnecting the marsh to the tidal regime on which it depends.
Recreation

As you go out on the Hayward shoreline, it’s like stepping off the clock. It’s the wilderness element that is here. The noise diminishes the further you walk out to the edge of the bay and you should pay attention to that. Solitude is there. – Lou Crutcher, East Bay Regional Park DistrictState law requires that tidal wetland restoration projects in San Francisco Bay provide wildlife-oriented public access––public access that does not disturb habitat areas but enhances wildlife appreciation. With the massive restoration efforts in the Hayward Regional Shoreline and Eden Landing, the San Francisco Bay Trail (Bay Trail) was improved to provide exactly this type of public access. The Bay Trail now extends into Eden Landing and out to the San Francisco Bay shoreline, then connects to the Hayward Regional Shoreline via a bridge. Bridges also connect segments of the trail over several tidal sloughs so that from the Hayward Shoreline Interpretive Center the trail now runs the entire length of the Hayward Regional Shoreline.

Johnson Landing Watershed drains to the south end of the 1,811-acre Hayward Regional Shoreline, which provides excellent opportunities for wildlife-oriented public access in tidal wetlands. Hayward Regional Shoreline is the East Bay Regional Park District’s crown jewel of restoration efforts, comprised almost entirely of tidal marshes, seasonal wetlands, and managed ponds. Here, the public can witness the progress of wetland restoration efforts over time. The Bay Trail leads from the Hayward Shoreline Interpretive Center near Highway 92 along levees out to the bay shoreline and north to Ora Loma Marsh.

The Hayward Shoreline Interpretive Center is operated by the Hayward Area Recreation and Park District, which is one of several agencies that work collaboratively through the Hayward Area Shoreline Protection Agency. The rustic building, built on pilings above tidal marsh, features exhibits, programs, and naturalist-led activities to develop appreciation for the bay and its inhabitants. One exhibit is a replica of the old Archimedes screw pumps that were used in salt production to pump water from one pond to the next. Remnants of these pumps can be spotted at various points along the trail systems within Hayward Regional Shoreline and Eden Landing.

Mt. Eden Creek flows to the north end of the 5,500-acre Eden Landing Ecological Reserve in Hayward, where 630 acres of tidal marsh were restored from 2010 to 2013. More restoration is planned. The reserve lies between Mt. Eden Creek to the north and the Alameda Creek Flood Control Channel to the south and extends inland nearly to Hesperian Boulevard. As part of the restoration effort, the Bay Trail was extended to provide public shoreline access along former salt pond levees affording excellent wildlife viewing. For those who want to fully experience the bay shoreline interface, a kayak launch provides water access. Operated by the California Department of Fish and Wildlife, the reserve is occasionally opened for limited waterfowl hunting with a permit.
Restoration

Within the Johnson Landing Watershed, the EBRPD collaborates on restoration projects with other agencies through the Hayward Area Shoreline Planning Agency (HASPA). Cogswell Marsh was restored in 1980 and is now a thriving 250-acre tidal marsh. Restored in 1985, Hayward Marsh is a 145-acre fresh and brackish water marsh that relies on secondary treated effluent as the fresh water source. The marsh has five managed ponds and 15 islands for nesting shorebirds and waterfowl. One pond is dedicated as habitat for the threatened salt marsh harvest mouse. HASPA is taking a leading role in developing environmental engineering solutions to ensure that marsh creation keeps pace with accelerating sea level rise and that marsh designs include inland levees protected from erosion by the marsh itself. In 2010, it commissioned a preliminary study entitled The Effect of Sea Level Rise on the Resources of the Hayward Shoreline. In Phases I and II of the South Bay Salt Pond Restoration Project at Eden Landing, project partners employ similar approaches to adapt to emerging flood control concerns as our climate changes. While they provide important habitat and help control floods, tidal marshes can also help slow the rate of climate change by capturing carbon from the atmosphere.
Get Involved