The Indian Gulch/Pleasant Valley Creek Watershed covers about three square miles draining much of the city of Piedmont and parts of the Lower Hills District of the city of Oakland. Urbanized hills with creeks in the valleys between them characterize the natural geography of Piedmont. The watershed’s four small creeks converge downstream and flow into the eastern arm of Lake Merritt, a major landmark near downtown Oakland, and from there into San Francisco Bay. There are two miles of noncontiguous open channel that flow through public parks and private property.Construction of roads in the canyon bottoms resulted in the culverting of most of the creeks in the watershed. The blue lines on the map show where natural reaches can still be found. 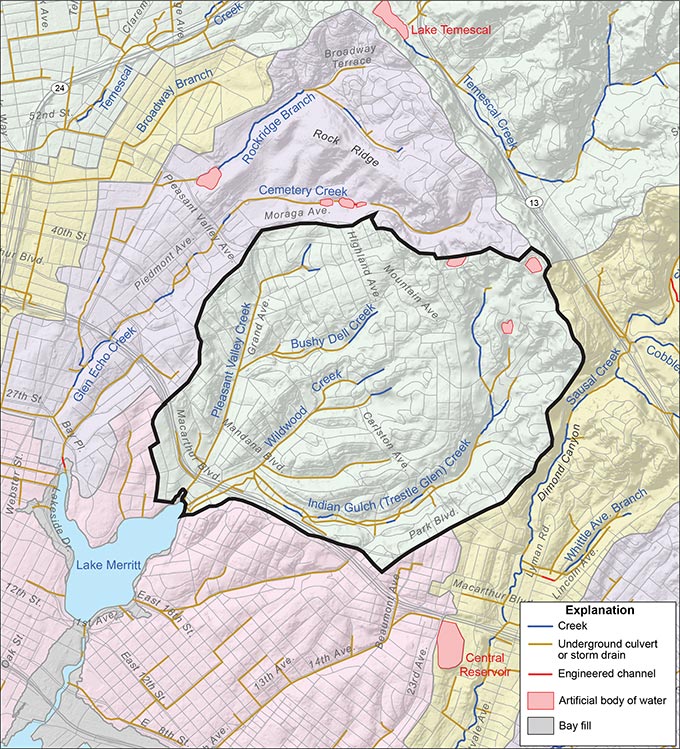 The watershed comprises several distinct habitats. Woodlands in Piedmont Park and along creeks and ravines support a variety of trees such as live oak, black oak, redwood, bay laurel, buckeye, alder, willow, and sycamore, along with many nonnative plants and ornamental trees typical of urbanized landscapes. Deer, opossums, skunks, raccoons, squirrels, and many types of birds also make the woodlands home. Grasslands occur in a small area of Mountain View Cemetery, where a variety of oat grasses, rye grasses, herbs, forbs, and bromes grow. In addition to the woodland species, denizens of the grasslands include snakes, lizards, wild turkeys, and raptors such as turkey vultures and red-tailed hawks.

The Indian Gulch/Pleasant Valley Creek Watershed is marked by knolls, low ridges, and valleys underlain by bedrock and alluvial sediments. These low hills lie west of the Hayward Fault and reflect uplift of this part of the East Bay Plain. At the creeks’ headwaters in the hills the underlying geologic material is Franciscan Complex sedimentary rock, such as sandstone, shale, and siltstone, from the Cretaceous period. These ancient sea floor sediments have been compressed into rock, uplifted, and eroded. Lower parts of the hills are underlain by older alluvium, sand, and gravel from the Pleistocene Era over 10,000 years ago. The streams have eroded the older alluvium and bedrock to create gulches. Geologic material from the Holocene Era (10,000 years to the present), such as alluvium, sand, silt, and gravel deposited by the creeks, underlie the valley floors and are often buried under roads and houses.

Major creek health issues include pollution from urban runoff containing accumulated grease, gasoline, animal waste, and pesticides that enters the city’s storm drains and creeks, and then flows to San Francisco Bay. While many reaches of the creeks have been culverted, sections that are still above ground face erosion issues and invasion from nonnative vegetation.

The Indian Gulch/Pleasant Valley Creek Watershed begins in the hilly eastern portion of Piedmont. The major creeks—Bushy Dell, Indian Gulch, Pleasant Valley, and Wildwood—flow southwest out of the hills into Lake Merritt in Oakland. The creeks are sustained by a combination of natural springs, rain water, groundwater, and urban runoff. The entire city of Piedmont, save for a narrow strip of land along Park Boulevard, drains to one of two outfalls at Lake Merritt’s eastern arm, accounting for at least one-quarter of the Lake Merritt watershed.

Bushy Dell Creek begins in Piedmont Park and flows in an underground culvert through Witter Field. It then joins the underground culvert beneath Magnolia Avenue and flows toward Grand Avenue where it merges with Pleasant Valley Creek before emptying into the northern outfall at Lake Merritt. The Piedmont Recreation Department has worked hard to restore native vegetation near the creek’s headwaters behind Piedmont Community Hall, where visitors can walk along the open creek before it reaches a culvert upon leaving Piedmont Park. Native vegetation includes young maples, oaks, alum root plants, and sword ferns among the redwoods.

Indian Gulch Creek originates near the Sotelo Avenue and Glen Alpine Road Loop and flows parallel to Sea View Avenue before coursing through the neighborhood of Crocker Highlands to the southern outfall at Lake Merritt’s eastern arm. Early settlers called the creek Indian Gulch after the Huchiun village that stood near the present-day intersection of Lakeshore Avenue and Trestle Glen Road. In 1893, F.M. “Borax” Smith built a rail trestle across the canyon to Sather Park, thus it also bears the name Trestle Glen Creek. The culverted creek swings back and forth under Trestle Glen Road outlining the original meanders of the creek before it was largely buried for urban development.

Pleasant Valley Creek originates in Dracena Park in Piedmont and flows under Grand Avenue to the northern outfall at Lake Merritt. It is entirely culverted except for its headwaters north of the park’s entrance.

Tyson Lake is a small, privately owned man-made lake near LaSalle Avenue and the headwaters of Trestle Glen Creek. Lying within the Mountain View Cemetery at the Oakland city limit, it has a mean depth of 18 feet and a volume of 3 million gallons of water. There is no public access.

Lake Merritt is a 140-acre tidal estuary with two high and low tides each day. The brackish water is a mixture of freshwater from the creeks, 62 storm drain outfalls that carry rainwater from the hills,and salt water that enters from the Oakland Estuary. Lake Merritt was originally an arm of the estuary. Surveys from the 1850s show a 500-foot-wide waterway connecting the two bodies of water. In 1896, Dr. Samuel Merritt constructed a narrow dam across the channel with gates to keep in the high tides, creating the Oakland icon known today as Lake Merritt.

The Lake Merritt Channel is a 100-foot-wide, free-flowing waterway that connects Lake Merritt to the Oakland Estuary and San Francisco Bay. Until recently the channel was impassable to watercraft, with a culvert at one end and a 12-lane roadway at the other. On February 22, 2013, a 750-foot section was re-opened after 140 years, allowing kayaks and other small craft to make their way from Lake Merritt to the bay. The project also included a new paved trail, a pedestrian bridge, and a restored tidal marsh.

The Oakland Estuary is a strait that connects San Francisco Bay to Lake Merritt and San Leandro Bay. It separates the cities of Oakland and Alameda.

Crocker Park is a quiet park in Piedmont with one acre of shaded lawn and paths lined with azaleas, rhododendrons, and magnolias. Its stone benches complement the centerpiece of the park, a granite sculpture a bear and her two cubs by Beniamino “Benny” Bufano. Residents enjoy the park as a quiet place to read or walk their dogs. Leashes ardracenae required.

Dracena Quarry Park encompasses eight acres of an abandoned rock quarry in Piedmont. The park is situated between two small above-ground sections of Pleasant Valley Creek and their riparian corridors. It features a cement slide built into a grassy man-made hill that leads to a large climbing wall. A playground and sand area with large rocks and splashing water make for a sensory-filled outing with the children. There is a lawn with a ringed pathway with the walls of the old quarry at its edge. Further north, lies a small stand of redwoods with a picnic table and dog run.

Located along the underground culvert that carried drainage from Wildwood Creek, Mandana Plaza Park is located at 600 Mandana Avenue at Lakeshore Avenue in Oakland. This small, half-acre park contains a field and play structure for children.

The Morcom Amphitheater of Roses (previously known as the Morcom Rose Garden) is a public garden of more than seven acres located at 700 Jean Street, one block off Grand Avenue in Oakland. It was constructed in 1932 and showcases ‘30s-era roses amidst a reflecting pool and cascading fountain, winding paths, and stairways. At the end of May and into June, the roses are in full bloom. The end of July and beginning of August and middle to end of September are also good times to visit. The garden provides a natural habitat for hawks and other birds as well as paths for walking or running. The garden is accessible by foot or wheelchair. Volunteers are welcome.

Piedmont Park and Exedra Plaza, at the center of Piedmont, comprise 15 acres and includes a playground, traditional Japanese tea house, and community center with a lawn for community gatherings. Behind the community center is the entrance to Bushy Dell Creek, a steep path, and dog run. The Piedmont Parks Department has been restoring native vegetation in the area giving it the feeling of a dense forest with oaks, alum root plants, and sword ferns. The main trail is about a third of a mile long and ends at the Piedmont school district’s sports complex. The park‘s formal entrance is the Exedra entryway at Highland and Magnolia avenues, which is marked by a distinctive blue ceramic vase sculpture. The east entrance to the park at 711 Highland Avenue is characterized by its sloping lawns. The Wildwood Avenue entrance offers scenic views of Witter Field at Piedmont High School and a panoramic view of San Francisco Bay and Mount Tamalpais.

Piedmont Sports Field is at the corner of Hampton Road and LaSalle Avenue, along the underground culvert that drains Indian Gulch. It is used for organized baseball, children¹s football, and soccer. The park also has two tennis courts, a backboard, volleyball court, and six basketball hoops. A children’s play structure and sand area are located a few feet away from the tennis courts.

Oak Grove Park is a long, narrow greenbelt that parallels a culverted fork of Wildwood Creek along Mandana Boulevard between Paloma Road and Lakeshore Boulevard in Oakland. It is owned and maintained by the Lakeshore Homeowners Association.

Splash Pad Park is a small park at the north end of Lake Merritt at Grand and Lake Park avenues across from the historic Grand Lake Theater in Oakland. Reopened in 2013, it features a central water fountain, picnic tables, gardens, and artworks like the Names in Lights panels designed by Walter Hoods. On Saturdays the Grand Lake Farmers Market occupies the park with over 100 food and craft stalls and live music.
Restoration

The City of Piedmont’s Clean Water Program seeks to reduce the amounts of pollutants entering the storm drain system. Most of the city is urbanized and its creeks are culverted, creating a significant amount of impervious surface area. Rainwater travels over rooftops, paved surfaces, and streets collecting litter, pesticides, metal particles from moving vehicles, and other pollutants before it goes into the storm drain system and out into creeks and the bay. Efforts are being made to decrease urban runoff pollution by enforcing strict requirements for streambed alteration and through city-wide street sweeping. The city is also engaged in efforts to conserve native vegetation, protect the urban forest, and control erosion. Beautification projects are undertaken by the city as well as by the Piedmont Beautification Foundation.

The City of Piedmont sponsors storm drain stenciling and other educational outreach programs to encourage the reduction of toxic pesticides and fertilizers. The Oakland Public Works Department sponsors the Adopt-a-Spot program for those interested in one-time or ongoing community cleanups or cleanup and beautification events related to specific city parks, creeks, shorelines, storm drains, streets, trails, medians, or other public spaces. Other opportunities include Oakland’s Adopt-a-Drain program and volunteer days at the Morcom Amphitheater of Roses.
© 2022 Alameda County Flood Control & Water Conservation District