The 2.6-square-mile Glen Echo Creek Watershed drains the Upper Rockridge and Piedmont Avenue areas in Oakland as well as parts of the City of Piedmont that lie near Mountain View Cemetery. Glen Echo Creek, also referred to as Cemetery Creek where it approaches and flows through the cemetery, and the Rockridge Branch are the two primary creeks that flow from the hills west of Highway 13. The Rockridge Branch flows to a pond behind The Ridge shopping center. There, the Broadway Branch carries the flow underground along Broadway. The creeks flow through residential and commercial areas with alternating daylighted and culverted sections. They cross under I 580 and continue until the Broadway Branch joins Glen Echo Creek above the west arm of its eventual outlet, Lake Merritt. 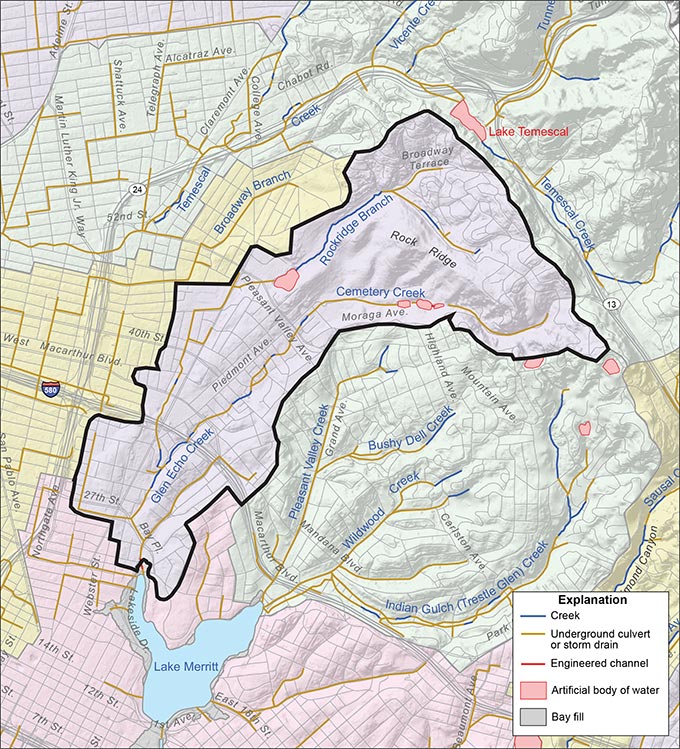 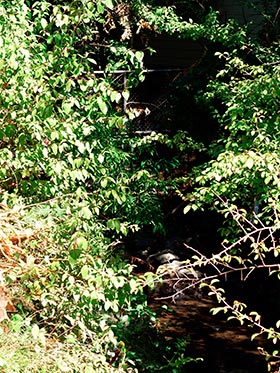 The Glen Echo Creek Watershed drains the Upper Rockridge area and continues through a residential section of North Oakland known as Piedmont Avenue. The creek is known as Cemetery Creek where it flows underneath Blair Park to Mountain View Cemetery. It emerges into a former wetland now called Coaches Field where dams create three reservoirs. Continuing downstream, Glen Echo Creek travels 1.25 miles southwest, passing through residential and commercial areas with alternating daylighted and culverted sections until it reaches its outlet at Lake Merritt.

Glen Echo Creek drains an area of low hills that were uplifted on the west side of the Hayward fault. Rocks that underlie the creek headwaters were formed on the sea floor during the time of the dinosaurs, around 100 million years ago. The rock ridge, for which a branch of the creek and the neighborhood were named, is composed of hard sandstone of this era. Behind the Rockridge Shopping Center, the former quarry where the rock was mined and crushed for building material is now filled with water from the Rockridge Branch of the creek. Further downstream, the hills are underlain by gravel and sand deposited by ancestral creeks.

Major environmental challenges include dumping, especially of yard waste, leaves, and soil; invasive plant species; and littering. In 2000, about 38,000 pounds of litter was recovered from Lake Merritt. According to the 2001 Technical Report by the Alameda Countywide Clean Water Program, Analysis of 2000-01 Source Investigations in Ettie Street Pump Station and Glen Echo Creek Watersheds, Oakland, California, sediment samples in Glen Echo Creek had elevated concentrations of PCB and total mercury that exceeded the screening values of the California Regional Water Quality Control Board, though still below levels classified as hazardous. 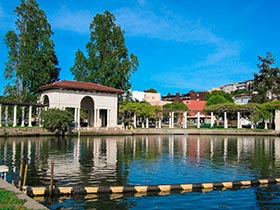 Glen Echo Creek drains the low-lying hills of North Oakland and a small part of the City of Piedmont west of Highway 13, through an underground culvert that runs along Moraga Avenue. The creek turns from Moraga Avenue and runs under Coaches Field into Mountain View Cemetery, where it passes through three reservoirs. Mountain View Cemetery is the reason this stretch of Glen Echo Creek is also referred to as Cemetery Creek. It’s also a great place for a quiet walk, where one can sit by a reservoir and watch the turtles search out the sun or take in views of San Francisco Bay. Glen Echo Creek exits the cemetery and flows primarily underground through the residential neighborhood east of Piedmont Avenue. The creek is daylighted in Glen Echo Park, a small open space corridor between Panama Court and Montell Street. The creek disappears underground at Montell Street and re-emerges west of MacArthur Boulevard in Oak Glen Park for several blocks along Richmond Boulevard. From there, the creek once again is culverted and then reappears by the Veterans’ Memorial Building at Harrison Street and Grand Avenue before emptying into Lake Merritt.

Glen Echo Creek drains the PANIL area (40 square blocks bounded by Broadway, MacArthur Boulevard, Oakland Avenue, and the City of Piedmont), the Rockridge area, Trestle Glen, lower Park Boulevard, and most of Piedmont. It flows through the Piedmont Avenue district and is the main tributary that empties into Lake Merritt’s western arm. Sections of open creek can be seen between Linda and Monte Vista avenues. The creek disappears underground and re-emerges west of MacArthur Boulevard in Oak Glen Park for several blocks along Richmond Boulevard. From there, the creek once again is culverted and then reappears by the Veterans’ Memorial Building at Harrison Street and Grand Avenue before emptying into Lake Merritt.

The Rockridge Branch drains the Upper Rockridge residential area, flowing through culverts along Broadway Terrace. A short offshoot flows along Clarewood Drive and surfaces in between the two entrances to Clarewood Lane. This offshoot joins the Rockridge Branch just above the Claremont Country Club where it flows above ground through the golf course and falls spectacularly into the reservoir at the former Bilger Quarry behind Rockridge Shopping Center. From there, it is culverted under the parking lot where it merges with the Broadway Branch at Broadway.

Lake Merritt is a 140-acre tidal estuary with two high and low tides each day. The brackish water is a result of the mixture of salt water from the Oakland Estuary with fresh water from five creeks, smaller streams, and 62 storm drains that carry rainwater from the Oakland hills. Lake Merritt is believed to have formed in the late Pleistocene era, more than 10,000 years ago. In 1896, Dr. Samuel Merritt constructed a narrow dam across the channel with gates to trap the high tides, creating the Oakland icon known today as Lake Merritt.

Lake Merritt is a 140-acre tidal estuary with two high and low tides each day. The brackish water is a result of the mixture of salt water from the Oakland Estuary with fresh water from five creeks, smaller streams, and 62 storm drains that carry rainwater from the Oakland hills. Lake Merritt is believed to have formed in the late Pleistocene era, more than 10,000 years ago. In 1896, Dr. Samuel Merritt constructed a narrow dam across the channel with gates to trap the high tides, creating the Oakland icon known today as Lake Merritt.

The Oakland Estuary is a strait that connects the San Francisco Bay to the west and the San Leandro Bay to the east, separating the cities of Oakland and Alameda. 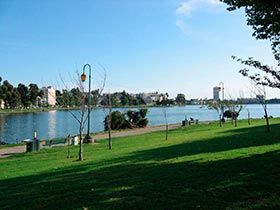 Two neighborhood parks, Glen Echo Park and Oak Glen Park, feature natural, open sections of Glen Echo Creek and provide places of calm amidst the hustle and bustle of city life. At Lake Merritt, bird watching, boating, cycling, and jogging are just a few of the activities people can enjoy.

Lake Merritt is home to a popular 3.1 mile (5 km) walking and jogging path that runs along its perimeter. The lake is a tidal lagoon that lies just east of downtown Oakland and is surrounded by parkland and city neighborhoods. It is part of the Pacific Flyway and became the first US National Wildlife Refuge in March 18, 1870. Recreational activities also include bird watching and boating.

Glen Echo Park is located on Panama Court and Monte Vista Avenue about one block east of Piedmont Avenue. The city park was officially dedicated on April 16, 1978. Although it is relatively small (0.72 acres), it provides a community garden and paths for walking along the open section of Glen Echo Creek before it runs into a culvert at the southern end under Monte Vista Avenue.Oak Glen Park is an open space corridor located between Westfall Avenue and Randwick Avenue along Richmond Boulevard at the lower end of Glen Echo Creek. Its 2.79 acres provide a riparian habitat that includes native oak trees. The last open section of Glen Echo Creek is an unnamed urban preserve located at 30th Street and Richmond Boulevard. It is a steep lot without formal public access that is a nesting ground for Cooper’s hawks.Mosswood Park. The Broadway Branch travels underground across Mosswood Park, a heavily-used, 11-acre park on W. MacArthur Boulevard between Webster Street and Broadway. It is managed by Oakland’s Department of Parks and Recreation and contains a community recreation center, extensive grassy lawns, picnic areas, playground, dog runs, tennis and basketball courts, and baseball fields. The neighborhood around the park is called Mosswood and it is in this neighborhood on Manilla and 38th Street where another section of daylighted creek can be seen.Lake Merritt Parks. Much of the shoreline of Lake Merritt is parkland. Glen Echo Creek drains into the northwest section of the lake capturing runoff from Children’s Fairyland and The Gardens at Lake Merritt. Children’s Fairlyland is a long-standing amusement park for young children that pairs nursery rhymes with rides and theatrical performances. The Gardens at Lake Merritt include 7 acres of scenic, themed gardens. Further along the northern shoreline of the lake are The Bonsai Garden, The Lake Merritt Boating Center, The Lake Merritt Wildlife Sanctuary, and East Shore Park.
Restoration 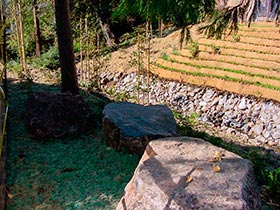 As most of the creeks in the watershed are culverted, native fish, aquatic insects upon which they feed, and other critical habitat components are scarce. Two major restoration projects have enhanced the remaining wildlife habitat.

In 2003, the Alameda County Flood Control and Water Conservation District undertook one of its first major bioengeering projects by restoring an area of Glen Echo Creek between Monte Vista Avenue and Montell Street within Glen Echo Park. The park is one of only a few small areas where the creek flows above ground after leaving the Mountain View Cemetery. Prior to restoration the creek banks were eroding and covered with nonnative vegetation. The restoration involved bank stabilization using bioengineered soil lifts to promote plant growth, removal of non-native plant and tree species, planting native plants and trees, and improving the existing pathway. Roots systems from native trees and shrubs, primarily willows, would permeate the lifts, thereby holding them in place and stabilizing the banks. As an integral part of the stabilization design, the native plantings were extensive, including species such as California buckeye, white alder, red-stemmed dogwood, and toyon. Long-term monitoring required replacing trees and plants that did not survive. The plants performed exceptionally well and today the site is thriving. Colonization by invasive species has been minimal, largely due to help from the local community. The decomposed granite path that replaced the former concrete one remains in good condition, allowing visitors to enjoy a nice walk through Glen Echo Creek Park.

In February 2013, the City of Oakland removed the dam and tide gate that constricted and controlled the tidal channel of Lake Merritt. The re-opening of this 750-foot section of the channel allows tidal water to flow freely into Lake Merritt from the San Francisco Bay, thereby increasing circulation and improving water quality. Removal of the dam has moved Lake Merritt closer to its historical state as a tidal estuary and has increased access for wildlife that uses this transition zone.