The three-square-mile Cerrito Creek Watershed lies on the western flank of the Berkeley hills and includes parts of the cities of Albany, Berkeley, El Cerrito, Kensington, and Richmond. The main stem of Cerrito Creek forms the boundary between Alameda and Contra Costa counties. The watershed currently contains a total of 3.9 miles of open channel; however, stormwater routing, stream culverting, and channel construction have significantly altered the natural drainage of the creek. 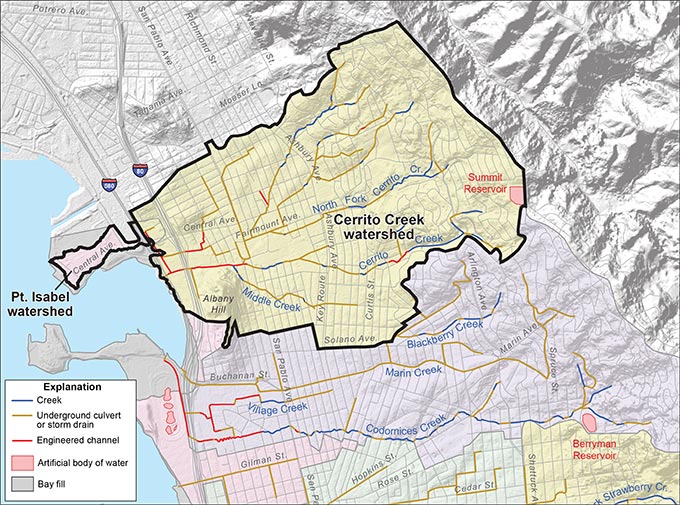 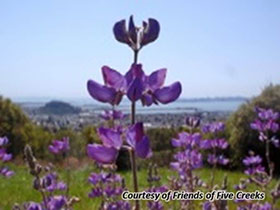 The Point Isabel Watershed drains .1 square miles of what was once a natural outcrop of sandstone that jutted into the bay and was connected to the shore by a tidal marsh. The elevation and natural drainage of the area was drastically altered during the 1950s when it was dynamited for development. Rubble, industrial waste, and other materials were used to fill the marshlands, widening the point and connecting it to the mainland.

The Cerrito Creek Watershed supports a variety of both native and non-native amphibians, mammals, and bird species. At El Cerrito Plaza, the creek has long supported a population of native Pacific chorus frogs, and downstream, the area adjacent to Albany Hill is rich in both bird and mammal species. The creek mouth at Albany Mud Flats, along with much of the adjacent shoreline, is closed to the public and legally protected due to the flats’ rich populations of shorebirds and waterbirds from fall through spring. The Point Isabel Watershed’s Regional Shoreline supports a rich diversity of birds. Visit the Friends of Five Creeks website for a list of species found in the watershed.

Powerful geologic processes, such as uplift, earthquakes, erosion, and mass wasting, created the Cerrito Creek Watershed. Near the ridgeline, the watershed is underlain by rocks formed on or beneath the sea floor over 60 million years ago. The strata are transected by the Hayward fault, a major earthquake fault that extends the length of the East Bay. Further downslope, the flatlands are underlain by layers of sand, gravel, silt, and clay eroded from the hills and deposited by the creek and its tributaries.Point Isabel is a hilltop in the ancient range of sandstone hills that also includes nearby Albany Hill.The hydrology of both watersheds has been greatly altered by urbanization–an increase in impervious surfaces such as roads, parking lots and rooftops; filling of marshlands; building of the underground storm drain system; and creek channelization. These have led to increased water pollution, decreased groundwater recharge, and flash floods—post-storm peak flows that are higher and faster than those that occurred earlier. 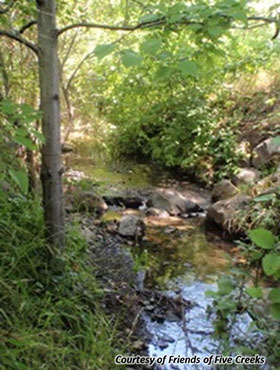 Cerrito Creek begins as a series of small springs and tributaries that flow into The North Fork, Middle Creek, and the main stem, the three main sections of the creek. Summit Reservoir, located in the southeast corner of the watershed, is the only water body not connected to the creek. Point Isabel Watershed does not contain any major creeks or water bodies.

Cerrito Creek begins near the crest of the Berkeley hills just west of Summit Reservoir and east of Arlington Avenue. Upstream, the creek marks the border between Berkeley and Kensington and downstream between Albany and El Cerrito. Stretches of open creek alternate with culverted sections before the creek enters an engineered channel just west of San Pablo Avenue.

The North Fork begins in the city of Kensington near Arlington Avenue and is similarly composed of open channel and underground culverts. The creek flows west, merging with two unnamed tributaries, one near Liberty Street and Fairmont Avenue and another at Kearney Street and Fairmont Avenue. Eventually the North Fork joins Cerrito Creek just west of El Cerrito Plaza.

Middle Creek begins at the intersection of San Carlos and Portland avenues in Albany. It is almost entirely culverted with the exception of a few small sections. The largest segment of open channel lies near the confluence with Cerrito Creek located in Creekside Park in Albany. Plant restoration efforts have been ongoing along the creek banks in this location since 2000.

Summit Reservoir, located in the southeast corner of the watershed at the top of Spruce Street, is a man-made fresh water reservoir. In the 1920s, the East Bay Municipal Utility District constructed an aqueduct through the Berkeley hills to transport water from the San Pablo Reservoir to a still-active pumping facility in Kensington, located just above the Colusa Circle. Some of the water is pumped up the hill to the reservoir. The rest is pumped to other reservoirs serving the East Bay.

The Point Isabel Watershed contains no creeks. All runoff flows either into the bay or into Hoffman Marsh, a small remnant of natural tidal marsh that runs alongside I-580. Hoffman Marsh receives significant runoff from a small creek just north of the Cerrito Creek Watershed. The runoff drains out though Hoffman Channel, a wide engineered channel that connects the marsh to the bay and allows the tides to flow in and out.
Recreation 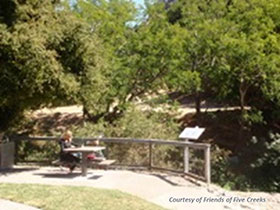 Publically accessible hiking, walking, and biking trails in the Cerrito Creek Watershed provide a wide range of recreational opportunities. Creekside Park, for example, offers a landscaped trail along the creek near Albany Hill. The Point Isabel Watershed includes the Point Isabel Regional Shoreline, which features impressive views of the bay.

The cities of Albany and El Cerrito have adopted a long-term plan for a pedestrian-bicycle route mostly along Cerrito Creek, connecting the Ohlone Greenway to the San Francisco Bay Trail. Many other walking, running and biking trails can be found within the parks listed below.

Blake Garden, a 10.6-acre public garden in Kensington operated by UC Berkeley’s Department of Landscape Architecture, encourages the understanding and appreciation of nature in a garden environment. It displays a wide variety of plants suitable for the Bay Area’s Mediterranean-type climate. It also features modern and historic garden design elements, from elegant reflector pools to a vegetable garden and a “create with nature” area for kids. UC students, professors, and staff use the garden to display some of their many projects, such as restoration work on the two small tributaries of Cerrito Creek. The garden is open to the public Monday through Friday from 8:00 a.m. to 4:30 p.m. It is closed on weekends and university holidays.

Creekside Park, on the border of Albany and El Cerrito, links Albany Hill Park to Cerrito Creek, creating a rare, nature-lover’s paradise in the midst of the city. Its attractions include hawks and songbirds, twisted old willows along the sparkling creek, open grasslands, spring-flowering elderberries and buckeyes, and a willow grove at the mouth of Middle Creek.

At Huber Park in El Cerrito, two seasonal tributaries join near lovely oaks and grassland reminiscent of the hills’ ecology before European settlement. Just downhill, the combined creek flows under a stonework play area built by the WPA during the Great Depression. This unnamed creek is now piped to the Cerrito Creek drainage.

Point Isabel Regional Shoreline is located along the eastern shore of San Francisco Bay and is administered by the East Bay Regional Park District. The park comprises the northwestern shoreline of the Point Isabel promontory from Hoffman Marsh to the Richmond Inner Harbor along Hoffman Channel. The San Francisco Bay Trail follows the edge of Hoffman Marsh. The northern shore of the park along Hoffman Channel, formerly a sandy beach, has been modified by leveling and infilling of the surrounding mudflats and tidal marsh. The 23-acre park is one of the largest public, off-leash dog parks in the nation and offers rich birdwatching opportunities, bay fishing, and running trails.
Restoration 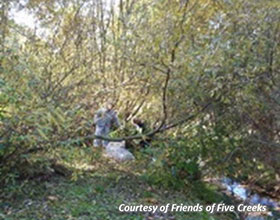 The Friends of Five Creeks (F5C) have planned and implemented many restoration projects along Cerrito Creek as well as other areas in the watershed. Projects include the removal of invasive plants and propagation of native plants. In 2003, a three-block daylighted section of Cerrito Creek, located between Talbot and Kains streets on the south edge of El Cerrito Plaza, was restored by the City of El Cerrito with funding from a California Coastal Conservancy grant. The shopping center parking lot was cut back, leaving room for a new, more meandering channel and a creekside trail. Friends of Five Creeks continue to maintain this area. More about ongoing restoration efforts can be found the F5C website.
Get Involved 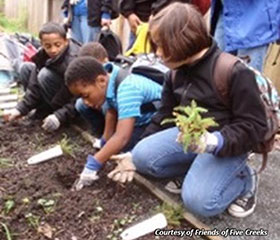