The waterways of the Hayward Landing-Bockman Canal-Sulphur Creek watersheds flow entirely through underground culverts and engineered channels to drain the low lying areas of San Lorenzo and the northwest section of Hayward. The three watersheds drain to San Francisco Bay through the Hayward Regional Shoreline Park where former salt evaporation ponds have been restored to tidal marsh.

The 2.78-square-mile Bockman Canal Watershed drains the flatlands in western San Lorenzo between Sulphur Creek Watershed and San Lorenzo Creek. It enters the bay in the northern extent of Hayward Regional Shoreline Park.

In the flatlands south of Bockman Canal is the 2.7-square-mile Sulphur Creek Watershed. The drainage runs through culverts under Hayward City Hall and drains the Hayward Executive Airport on its way to the bay. The portion of Sulphur Creek above 2nd Street was diverted to San Lorenzo Creek and is no longer part of this watershed.

The 3.4-square-mile Hayward Landing Watershed begins in Hayward near Soto Road in the east, shares its southern border with Old Alameda Creek and Johnson Landing watersheds, and follows West Winton Avenue along its northern border. 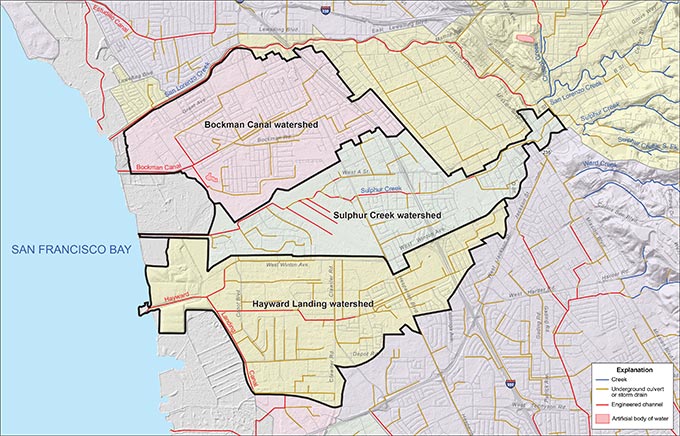 The historic shoreline between the San Mateo Bridge and San Leandro Marina was once dominated by tidal marshes and tidal flats, many of which were converted to commercial salt ponds in the late 1800s. Salt grass, pickleweed, and cord grass were the dominant plant species. They typically grow in that order from higher marsh plain to lower. The restored Oro Loma Marsh now contains wide meadows of pickleweed along the interior marsh, making it prime habitat for the state and federally endangered salt marsh harvest mouse. Cord grass is prevalent along the levee breeches and natural marsh channels, and salt grass is returning along the inland rim of the marsh. Native cord grass provides habitat for the state and federally endangered California clapper rail. The small sandy beaches that dot the edge of the Hayward Regional Shoreline are prime habitat for the state and federally endangered California least terns that have set up colonies there in recent years. Similar conditions exist in Cogswell Marsh, but the pickleweed is even denser.

The three watersheds drain across creek sediments deposited over thousands of years by San Lorenzo and Sulphur creeks. They open to vast intertidal wetlands along San Francisco Bay that formed over the last 4,000 years as the slowly rising sea level inundated the bay shoreline. The accumulation of sediment and organic material, such as peat, prevented tidal marshes from becoming completely inundated.

As they drain primarily urban areas, these three watersheds are characterized by waterways that are entirely underground or flow through engineered channels east of the bay wetlands. As such, they lack adequate sediment, vegetation, and sunlight, all of which are necessary to sustain a creek ecosystem. Despite marsh restoration, beautiful park settings, and signage between the shoreline and wetland edges, littering and illegal dumping still take place. Trash removal creates additional financial costs for the agencies managing the shoreline.

Although the three watersheds drain urban areas primarily through underground culverts and engineered channels, near the bay they drain through some of the early salt pond restoration projects. Located within Hayward Regional Shoreline, Oro Loma Marsh and Cogswell Marsh were former salt evaporation ponds that were restored to tidal marsh in 1998 and 1980 respectively.

Bockman Canal drains the western portion of San Lorenzo along the gently sloping flank of the alluvial fan of San Lorenzo Creek. It is underlain by layers of sand, silt, and clay deposited by the creek floodwaters over thousands of years. The canal enters the bay north of Oro Loma Marsh and south of the East Bay Discharge Authority’s water treatment plant.

Underground culverts throughout the Sulphur Creek Watershed drain to Sulphur Creek, which is an open, engineered channel that traverses the urban flatlands of Hayward. The channel supplies water flow into restored Oro Loma Marsh along the way. In the past, Hayward was frequently flooded by storm waters from Sulphur Creek—a problem partly alleviated by the culverting of the creek in the 1920s. Then, in 1962, the County of Alameda rerouted the creek to join San Lorenzo Creek at 2nd Street. The Sulphur Creek headwaters in the East Bay hills—the only portion of the creek still flowing in its natural creek bed—is now part of the San Lorenzo Creek Watershed.

Oro Loma Marsh lies between Sulphur Creek and Bockman Canal. The area was diked from the bay and local creeks to form salt evaporation ponds for commercial salt production. In 1998, the marsh was restored, in part by breeching the Sulphur Creek levee and the outboard levee along the bay to restore tidal flow.

Underground culverts throughout the Hayward Landing Watershed drain to three open engineered channels: Zone 2, Line A* drains the center of the watershed; Zone 2, Line B drains from the north; and the Hayward Landing Canal drains the south side running northwesterly. The canal is joined by Line A, then turns at its juncture with Line B to drain through Hayward Regional Shoreline, reaching the bay at historic Hayward Landing. The remains of the docks where local goods were transported to San Francisco in the 1800s can still be seen there today. Within the Hayward Regional Shoreline, the canal runs past the former West Winton Landfill, which today appears as a series of low hills at odds with the surrounding marsh plain.

The 200-acre Cogswell Marsh is located in the baylands south of Hayward Landing Canal in an area historically used for salt production. In 1980 the site was restored to tidal marsh through an early, interagency effort that set a process in motion for future restoration projects. As one of the older salt pond restoration efforts, it serves as an example of what to expect from the massive South Bay Salt Pond Restoration Project.

The San Francisco Bay Trail (Bay Trail) rings the shoreline of San Francisco Bay extending some 500 miles in total. Within Hayward Regional Shoreline, the trail runs mostly along the outboard salt pond levees. Bridges connect segments of the trail where levees were breached for restoration and over natural tidal sloughs. Parking is located just north of Bockman Canal on Grant Avenue and near Hayward Landing on West Winton Avenue.

Bockman Canal, Sulphur Creek, and Hayward Landing Channel drain to the 1,811-acre Hayward Regional Shoreline, which provides excellent opportunities for wildlife-oriented public access along the margins of tidal wetlands. This shoreline park is the East Bay Regional Park District’s crown jewel of restoration efforts, comprised almost entirely of tidal marshes, seasonal wetlands, and managed ponds. Here, the public can witness the progress of wetland restoration efforts over time. The Bay Trail leads from the Hayward Shoreline Interpretive Center near Highway 92 along levees out to the bay shore and north to Oro Loma Marsh.

The 31-acre San Lorenzo Community Park is located directly inland from Oro Loma Marsh but provides a very different recreational experience. After a quiet walk at Hayward Regional Shoreline along trails built for wildlife-viewing, this park is a great place to let kids run free, climb on play structures, or play soccer, or to have a picnic at one of many tables. There is a large duck pond in the middle of the park and a community recreation center. The marsh across the railroad tracks and San Francisco Bay beyond it can be viewed from almost anywhere in the park.

Both Cogswell Marsh and Oro Loma Marsh were former salt evaporation ponds, cut off from San Francisco Bay by levees. Before commercial salt production in the 1800s this area of the shoreline supported tidal marsh, freshwater marsh, and seasonal wetlands. After commercial salt production had ceased at the Oro Loma site, and typically at other former salt ponds, standing water would accumulate and then evaporate, causing the underlying clay to swell and then shrink. The resulting cracks are perfect breeding ground for mosquitoes. Even in this state, the Oro Loma site supported the endangered salt marsh harvest mouse, but offered little or no value to waterfowl or shorebirds. Due to the need to manage the site for the mouse, mosquito control measures such as disking were not available. A number of agencies partnered to restore the site to tidal marsh and seasonal wetlands. The site was graded to support vegetation by marsh plants and the creation of natural tidal channels. In 1997 the outboard and Sulphur Creek levees were breeched, allowing tidal action within the 364-acre site. A similar approach was used at the 250-acre Cogswell Marsh near Hayward Landing Channel in 1980. Both marshes are thriving and provide an interesting comparison of how quickly the full scope of tidal marsh restoration can be achieved.

Although there is no single organization focused on Bockman Canal, Sulphur Creek, or Hayward Landing watersheds, there are several organizations that fund or provide free watershed education programs and resources for residents and teachers within and near these watersheds.