Located within the larger San Francisco Bay, San Leandro Bay is formed by the shorelines of Oakland, Alameda, and Bay Farm Island. The 1.3-square-mile San Leandro Bay Watershed drains the inland shoreline areas of urban Oakland from the mouths of Elmhurst Creek to Sausal Creek. Most of San Leandro Bay Watershed drains the industrial areas west of I-880 with a small portion extending as far inland as San Leandro Boulevard. The drainage flows through the Martin Luther King Jr. Regional Shoreline where a trail system and restored wetlands provide wildlife viewing opportunities.

The 2.8-square-mile Bay Farm Island Watershed drains through engineered structures to San Francisco and San Leandro bays. Bay Farm Island was once a large sand dune bordered by a wide swath of tidal marsh along the inner bar in San Leandro Bay. Artificial fill was used to extend the island further into San Francisco Bay and cover the marsh on the inland side of the island, eventually connecting the island to the mainland. Most of Bay Farm Island is part of the city of Alameda, except the southern portion where Oakland International Airport is located. 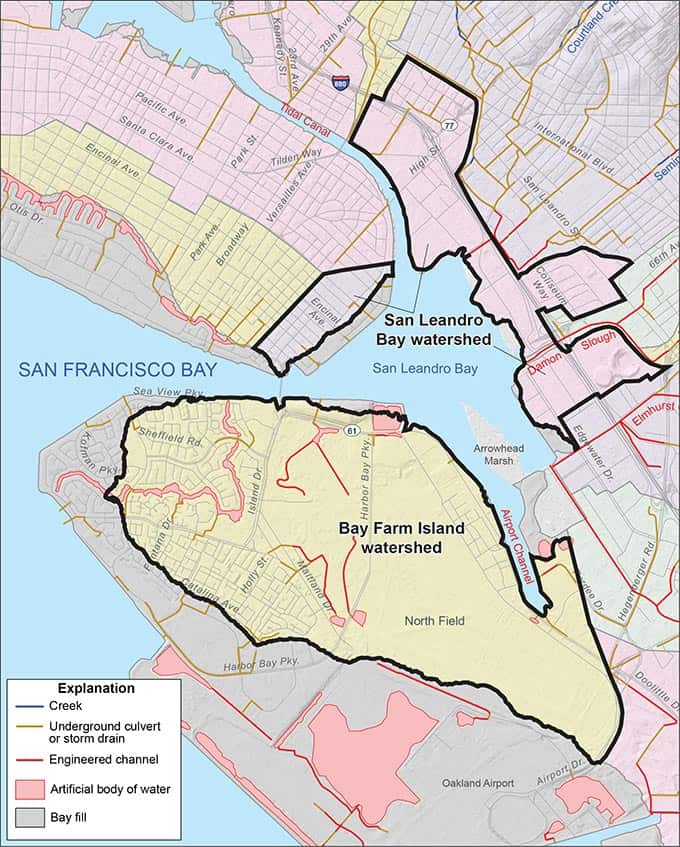 The entire shoreline of San Leandro Bay was once dominated by tidal marsh giving way to seasonal wetlands inland. The marsh was filled and developed for industrial uses, but in recent years much of the marsh and wetlands have been restored. Parking lots have been converted to seasonal wetlands of salt grass and pickleweed. In tidal areas, gum plant, salt grass, pickleweed, and cord grass predominate, growing in that order from higher marsh plain to lower. Pickleweed along the interior marsh makes for prime habitat for the state and federally endangered salt marsh harvest mouse. Cord grass is prevalent along tidal sloughs and channels, and salt grass is returning along the inland rim of the marsh. Native cord grass provides habitat for the state and federally endangered California clapper rail, and the small sandy beaches that dot the edge of San Leandro Bay, similarly, are home to the endangered California least tern.

Large shell deposits off the East Bay and San Mateo shorelines in central San Francisco Bay indicate that shellfish once thrived there. The shellfish provided food for bat rays and shorebirds and were collected by Native Americans. European settlers supplemented the native oyster population with an Atlantic species when they began farming oysters in the 1890s, creating a successful industry. Bay Farm Island was surrounded by oyster farms that served San Francisco restaurants. Water pollution and the filling of tidal flats and marshes for airports, landfills, and other industrial uses led to the industry’s failure. By 1939, oysters either died from lack of oxygen or were unsafe to eat. Today, the bay west of Bay Farm Island supports a limited population of shellfish, including non-native Atlantic oysters, native oysters, and hybrid oyster species. Experimental oyster restoration projects are underway in several locations within San Francisco Bay.

The shoreline along San Leandro Bay and the outer edge of Bay Farm Island were formed largely by artificial fill of mixed origins on top of former tidal marsh. The beach and sand dune that formed the original Bay Farm Island date from the late Quaternary period.

San Leandro Bay sediments contain higher levels of contamination than the rest of San Francisco Bay. Like the greater south San Francisco Bay, San Leandro Bay is on California’s 303(d) list of impaired water bodies as determined by the San Francisco Bay Regional Water Quality Control Board. San Leandro Bay is also on California’s list of Toxic Hot Spots due to excessive levels of DDT, lead, mercury, pesticides, PCBs, PACs, selenium, and zinc in its sediment. In sediment tests, the highest concentrations of contamination were found near creek channels, indicating that the sources are from point and nonpoint inputs. The one exception was mercury, which had higher concentrations in open water areas compared to tributaries.

Bay Farm Island is actually a peninsula located within both the cities of Alameda and Oakland. It is drained by many engineered channels and culverts that flow to San Francisco Bay and San Leandro Bay. As most of the area is artificial fill, there are no creeks or named waterways.

San Leandro Bay is a small inlet within San Francisco Bay formed by the Oakland shoreline to the east, Bay Farm Island to the south, and Alameda Island to the north. The Martin Luther King Jr. Regional Shoreline covers a large portion of the bay shore and is also the location of two tidal marsh and seasonal wetland restoration sites. San Leandro Bay is actually the catchment for several different watersheds, including Sausal Creek, Peralta Creek via East Creek Slough, Lion Creek via Damon Slough, Elmhurst Creek, and San Leandro Creek. Click on any of the links above for more information.

Located near 50th Avenue in Oakland, East Creek Slough is a tidally influenced channel that connects the Peralta Creek Watershed to San Leandro Bay. The Damon Marsh multi-use shoreline trail—also part of the San Francisco Bay Trail—crosses the creek over a pedestrian bridge and continues north past a small, developing tidal marsh.

Located near 66th Avenue off Oakport Street in Oakland, Damon Slough is a tidally influenced channel that connects the Lion Creek Watershed to San Leandro Bay. The Damon Marsh multi-use shoreline trail crosses the slough and continues north past the marsh, which supports significant populations of shoreline birds and migratory waterfowl and is the site of ongoing restoration efforts.

San Leandro Creek and Elmhurst Creek enter San Leandro Bay through engineered channels at Arrowhead Marsh near the Oakland International Airport. Arrowhead Marsh is a young tidal marsh that was likely created during the construction of the Lake Chabot dam when a severe storm sent 21,000 cubic yards of the dam’s clay core downstream to the mouth of San Leandro Creek. Since the creation of the Martin Luther King Jr. Regional Shoreline, surrounding marshlands have been restored, expanding the available habitat for shoreline birds and migratory waterfowl.

The San Francisco Bay Trail (Bay Trail), when complete, will trace the shoreline of the entire bay. Within the Marin Luther King Jr. Regional Shoreline in Oakland, the Bay Trail is also known by several other names, including the Damon Marsh Trail, Garretson Point Trail, and the Arrowhead Marsh Trail. These trails follow the shoreline of San Leandro Bay.

At the Tidewater Boating Center near the mouth of the Oakland Estuary, boaters will find a launch site for the San Francisco Bay Water Trail system. These launch and landing sites, or “trailheads,” provide access to San Francisco Bay for human-powered boats and beachable sail craft for single- and multiple-day trips. This innovative water trail system is designed with all skill levels in mind, from beginner to advanced. The launch site at Tidewater Boating Center provides access to isolated San Leandro Bay and is ideal for less experienced kayakers.

The 741-acre Martin Luther King Jr. Regional Shoreline includes most the shoreline of San Leandro Bay. The park is leased from the Port of Oakland by the East Bay Regional Parks District to preserve what remains of a former extensive tidal marsh and provide public access to the shoreline. The park contains the Tidewater Boating Center and Arrowhead Marsh, which is believed to have been created by sediment carried downstream when Lake Chabot’s dam burst during construction. The marsh is a stopover on the Pacific Flyway and part of the Western Hemisphere Shorebird Reserve Network, which is a conglomerate of dedicated organizations spanning 13 countries and 31 million acres.
Restoration

The Martin Luther King, Jr. Regional Shoreline includes the last remaining tidal marshes in San Leandro Bay; all others have been filled in for development. In 1998, at the “handle” of Arrowhead Marsh, fill was removed, artificial levees were breached, and tidal channels were constructed to restore tidal action. Plant and animal colonization began shortly thereafter and continues today. At Damon Slough, the East Bay Regional Parks District and Save the Bay work to replace nonnative plants with natives and maintain a native plant nursery for that purpose.

Information about volunteer and educational opportunities can be found by visiting these sites.
© 2023 Alameda County Flood Control & Water Conservation District