The 6.2-square-mile Arroyo Viejo Creek Watershed begins on the western slope of the Oakland hills and runs west through Oakland to the San Francisco Bay, narrowing as it passes through flatter land. The eastern boundary of the watershed roughly parallels Skyline Boulevard, where it meets the San Leandro Creek Watershed. There are five creeks in the watershed: Rifle Range, Country Club, Melrose Highlands Branch, 73rd Avenue Branch, and Arroyo Viejo. The Rifle Range and Country Club branches discharge into the Arroyo Melrose Highlands Branch, which then drains Into Arroyo Viejo Creek proper. At that point, the creek enters a series of engineered channels and underground culverts that carry its water to San Leandro Bay within the larger San Francisco Bay. 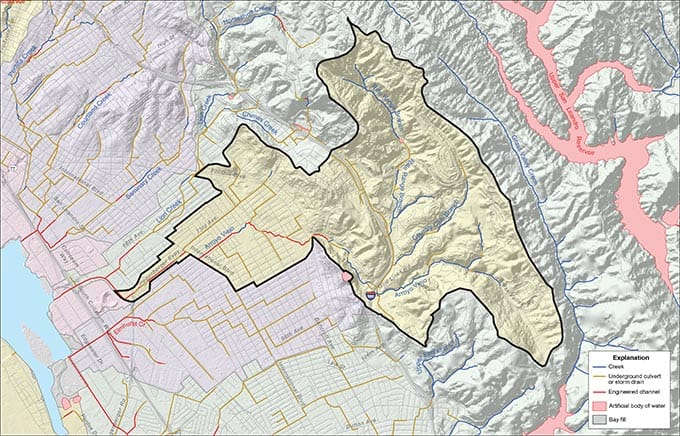 Arroyo Viejo Creek and its tributaries historically provided habitat for native amphibians, fish, and other aquatic organisms. Poor water quality, culverting, and altered hydrology have devastated these populations in the western, more urban portion of the watershed. The headwaters in the Oakland hills continue to support a variety of animals including mule deer, Californian vole, and the Sierran treefrog. Some of the plants commonly found in this area include coast live oak, maiden hair fern, and California poppy; click here for the full plant species list. A list of other species found in Leona Canyon, a large open space that typifies the upper watershed, can be found here.

Powerful geologic processes, such as uplift, earthquakes, and mass wasting, created the Arroyo Viejo Creek Watershed. The eastern portion is largely within the Oakland hills and is crossed by the Hayward Fault, which runs just west of I-580 along Michigan Avenue and continues southeast through the watershed. The western portion of the watershed sits on an alluvial fan––a fan-shaped deposit of water-transported material (alluvium) that typically forms at the base of hills or other topographic features where there is a marked change in slope. These alluvial soils are composed of layers of sand, gravel, silt, and clay eroded from the nearby hills.

As with many urban areas, surface runoff carrying potentially harmful pollutants, such as fertilizers, pesticides, animal waste, heavy metals, gas and oil, and other contaminants, is a major resource concern. The creek also transports a significant amount of litter to the shoreline and bay, particularly lightweight plastic products like food wrappers and drink containers that enter through connected storm drains. Watercress and other invasive aquatic vegetation are also problematic, as they capture trash, potentially degrading water quality.
Waterbodies

Arroyo Viejo Creek begins as a series of small springs and tributaries on the western slope of the Oakland hills with Skyline Boulevard forming its eastern boundary. The watershed contains a network of open creeks, engineered channels, and underground culverts.

Arroyo Viejo Creek begins as two short branches of almost entirely open creek. One begins on the grounds of the Sequoyah Country Club and the other in Knowland Park. The two branches converge within the park, where the creek then roughly follows Golf Links Road until it crosses under I-580. The channel is primarily open until it reaches Holy Redeemer College, just north of Seneca Reservoir. It is then contained in engineered channels and culverts, interrupted by one semi-natural segment through Arroyo Viejo Park. The creek continues through similar structures before eventually merging with Lion Creek near the Oakland Coliseum, then drains into San Leandro Bay.

The Country Club Branch consists of over a mile of primarily open creek with a couple of smaller culverted segments. This branch gets its name from its location following the northwestern boundary of the Sequoyah Country Club. It begins in a culvert under Surray Lane and flows westerly to its confluence with the Melrose Highlands Branch at Calafia Avenue and Mountain Boulevard.

The Rifle Range Branch begins in the Leona Canyon Regional Open Space Preserve, where it flows naturally through the canyon for over a mile. As the creek leaves the preserve on the southeastern end, it enters an underground culvert along Campus Drive. It then flows west along Keller Avenue before exiting the culvert and continues primarily unconfined toward the southwest. The creek eventually joins with the culverted Melrose Highlands Branch, which follows Mountain Boulevard toward Arroyo Viejo Creek.

The entire extent of the Melrose Highlands Branch is contained in an underground culvert along Mountain Boulevard. The creek flows southwest to its confluence with Arroyo Viejo Creek near Golf Links Road in the Grass Valley neighborhood of Oakland.

This 30-million-gallon capped reservoir, carved out of a hillside in 1950, lies just north of Bishop O’Dowd High School in Oakland and is off limits to the general public. Owned and operated by the East Bay Municipal Utility District, it is part of a network of reservoirs, aqueducts, treatment plants, and distribution facilities that extends from the Mokelumne River Basin in the Sierra Nevada to the East Bay.

The entire 73rd Avenue Branch has been placed in underground culverts with the exception of a one-block segment at its origin between Ney and Outlook avenues. This small section of creek, located in a highly developed residential area, then enters a culvert under 73rd Avenue for over a mile before draining into Arroyo Viejo Creek at International Boulevard.

San Leandro Bay is an arm of the San Francisco Bay, located along the east side of the Oakland International Airport and Bay Farm Island. Once a rich habitat for wildlife, most its original marshland and habitat have been filled or dredged. See Arrowhead Marsh on the East Bay Regional Parks website to find a map of the remaining area of these tidal marshes.
Recreation

The watershed offers several publically accessible trails and parks for walking, biking, and other forms of recreation.

Located in the Martin Luther King Jr. Regional Shoreline, these two trails intersect at the engineered channel draining Lion and Arroyo Viejo creeks and offer views of Damon Marsh. The trails are open for walking and biking throughout the year during daylight hours.

Located in Leona Canyon Regional Open Space Preserve, the Leona Trail follows the Rifle Range Branch through the preserve. Starting from Merritt College, the trail enters the preserve at its northern boundary and soon reaches the beginning of the Rifle Range Branch. The trail follows the creek, bisecting the preserve, and exits at the southern boundary, where it intersects with Campus Drive. The Leona Trail is open year-round during daylight hours.

Operated by the City of Oakland, Arroyo Viejo Park is located at 7701 Krause Avenue. The park offers access to the last natural segment of Arroyo Viejo Creek, along with picnic areas, baseball and soccer fields, an amphitheater, and a recreation center. The park is open year-round during daylight hours.

Knowland Park, located off Golf Links Road in the Grass Valley neighborhood of Oakland, was formerly a state park and is now the property of the City of Oakland. The Oakland Zoo occupies the developed western lowlands of the park, while the largest and most pristine portion is undeveloped but accessible to park users. Rare native plants and wildlife thrive in the western highlands and on the northern slopes. Some of the natural highlights of the park include rare native plant communities, locally thriving but threatened wildlife, choice bird-watching locales, and an important migratory corridor for mountain lions and bobcats. In 2010, the East Bay Chapter of the California Native Plant Society (EBCNPS) included Knowland Park in its South Oakland Botanical Priority Protection Area. The park is open year-round from sunrise to sunset.

The Leona Canyon preserve, a 290-acre parkland near Oakland’s Merritt College, is accessible from a staging area on Campus Drive off Keller Avenue east of I-580. The park was developed to protect the wooded Leona Canyon for recreation and nature appreciation. A large section of the natural flowing Rifle Range Branch of Arroyo Viejo Creek is accessible to the public. While the majority of this park lies in the Arroyo Viejo Watershed, its far western edge is part of the Lion Creek Watershed. The park offers a network of hiking trails and is open year-round during daylight hours.

Located off Doolittle Drive and Swan Way in Oakland, this 741-acre park is leased from the Port of Oakland and operated by the East Bay Regional Park District. The park was established to protect the remainder of a once-extensive marshland at San Leandro Bay and includes Damon Slough, where the water from both Arroyo Viejo and Lion creeks enter the bay. San Leandro and Peralta creeks also enter the bay through the shoreline park. The marshland attracts numerous migratory shorebirds and offers excellent bird-watching opportunities among a network of walking and biking trails, picnic areas, and fishing spots. The park is open year-round during daylight hours.

The Oakland Zoo is located on 45 acres at the western end of Knowland Park in the Grass Valley neighborhood of Oakland. Arroyo Viejo Creek flows through the grounds and is the site of an ongoing restoration project. The zoo also organizes the Arroyo Viejo Creek Crew, a group of volunteers who meet every third Saturday of the month to conduct creek cleanups, remove invasive species, and carry out other creek improvement projects throughout the park.
Restoration

The Arroyo Viejo Creek Improvement Project was implemented in 2001-2002 by the City of Oakland and the Alameda County Public Works Agency to enhance a 750-foot stretch of urban creek in Arroyo Viejo Park. The project included partial removal of concrete channel walls in the eastern half of the project area, regrading and revegetation of channel banks, and installation of park enhancement features. In addition to enhancing public safety and access, these improvements were designed to provide environmental benefits such as habitat improvement, long-term bank stability, and improved water quality. Click here for more information.

Completed in early 2007, the Arroyo Viejo Creek Restoration Project was a partnership between the California Coastal Conservancy, the California Department of Parks and Recreation, the Alameda County Flood Control and Water Conservation District, and the City of Oakland. Located in Knowland Park near the Oakland Zoo, the objectives of the project were to increase the population of native plant species, enhance wildlife habitat, and increase public access, along with creating outdoor classrooms near the creek banks. The project allowed the Oakland Zoo to provide hands-on educational opportunities to local students, underscoring the delicate balance and interdependence between plants, animals, and humans. Continuing restoration efforts include removing non-native plants, planting native species, holding classes in the six outdoor classrooms, and maintaining a connecting trail to the rest of Knowland Park. The Arroyo Viejo Creek Crew, a group of volunteers organized by the zoo who meet every third Saturday of the month, carry out many of these tasks and other creek improvement projects throughout the park. Click here for more information.
Get Involved

The organizations below fund or provide educational resources for residents and teachers or coordinate volunteer activities in the Arroyo Viejo Creek Watershed. Educational as well as volunteer opportunities are usually free of charge. Additional links and resources can also be found by visiting these sites.