Located along the southernmost edge of Fremont and an unincorporated area of Alameda County, the eight-square-mile Agua Fria Creek Watershed drains Mount Allison (2,658 feet) and Monument Peak (2,594 feet) along the Mission Peak ridgeline in the Diablo Range. Unlike other East Bay watersheds that drain the hills and then cross a wide flat plain before entering San Francisco Bay, the longest stretches of creek in this watershed are upstream between the Mission Peak ridgeline and I-680. Flowing through rangeland and much of Mission Peak Regional Preserve, Agua Fria, Toroges, and Scott creeks then proceed through small residential pockets, enter culverts under I-680, and continue through a combination of culverts and engineered channels across a condensed urban plain before entering the bay via Coyote Creek. 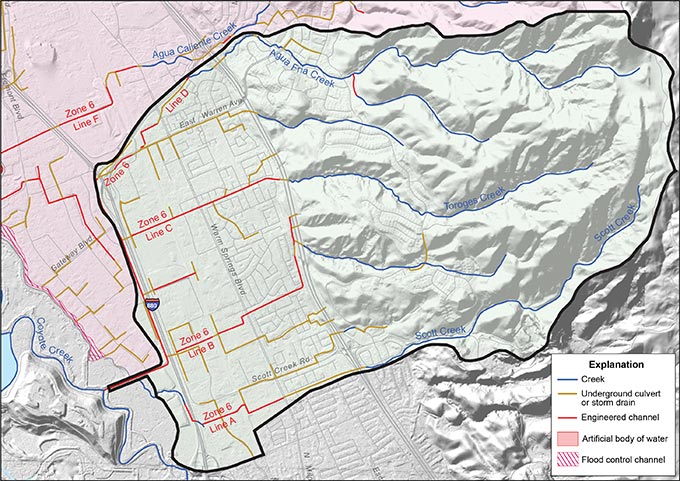 The Agua Fria Watershed drains through Miocene epoch sedimentary rock on the west side of the Diablo Ridge and then through Pleistocene epoch sediments to I-680. The drainage is directed into culverts under I-680, which parallels the Hayward Fault. During the Pleistocene epoch, a large river flowed through this area to what is now south San Francisco Bay. Movement along the Hayward Fault interrupted the river flow, creating many creeks. In the last several thousand years, these creeks flowed to the bay across a wide marsh plain thick with vegetation and branching waterways. The process that formed south San Francisco Bay tidal marshes is explained in detail in the Mowry Slough section.

Water contamination levels in the Agua Fria Watershed are consistent with urban areas in the region. Mercury, PCBs, and PBDEs are the greatest concerns, while dioxins, pyrethroids, PAHs, and selenium are also problematic. Though overwhelming evidence demonstrates the potential of tidal marshes to improve water quality, the large-scale restoration activities in the South Bay may have their own adverse water quality impacts. These are detailed in a study by the San Francisco Estuary Institute. In the course of the restoration effort, the potential impacts are identified, mitigated where possible, and addressed through an adaptive management approach.
Waterbodies

The Agua Fria Watershed includes Agua Fria, Toroges, and Scott creeks as well as an unnamed creek and tributary. Located in the Alameda County Flood Control and Water Conservation District’s Zone 6, it also includes engineered Lines A, B, C, and D*, which flow to Coyote Creek and on to south San Francisco Bay.

Beginning south of Mount Allison, Agua Fria Creek flows west through a wooded valley for about three miles before it reaches a residential development at Rancho Higuera Road. It is joined by an unnamed tributary, then flows parallel to Curtner Road through the residential neighborhood until it is diverted through a culvert under I-680. It reappears in its natural channel on the other side, continues through intermittent culverts and engineered channels along Hwy 262, and then joins an engineered channel known as Line D. This channel joins Line C, flowing parallel to I-880, then turns south until it makes a sharp westerly turn to join Line B, the channel that collects drainage from throughout the watershed and flows to Coyote Creek.

Toroges Creek drains the east side of the ridgeline between Mount Allison and Monument Peak. It flows through a wooded riparian corridor, passing through a small residential area as it heads for I-680. It is diverted under the interstate and makes a straight shot through an engineered channel to I-880, where it again goes underground to cross the freeway. West of I-880, the creek is diverted into Line C, eventually flowing to Coyote Creek.

Further down the west side of Monument Peak from Toroges Creek, an unnamed creek runs through a parallel valley. The creek is diverted under I-680, flows to engineered channel Line B, is diverted again under I-880, and continues to Coyote Creek.

Scott Creek drains the east side of Monument Peak through a long wooded valley along the southernmost edge of the city of Fremont and Alameda County. The creek passes through a residential pocket just east of I-680 before being diverted into an underground culvert. From there, the creek continues straight to Warm Springs Boulevard and joins Line A, flowing primarily via engineered channel to Line B just above its juncture with Coyote Creek.

Coyote Creek Lagoon is a large tidal pool and tidal marsh located between Coyote Creek and Mud Slough (in the Laguna Creek Watershed) and is influenced by tides from both sources. A segment of the San Francisco Bay Trail runs for .4 miles along the south side of the lagoon and offers views of tidal marsh, salt ponds, and the bay beyond.

In aerial photos of San Francisco Bay, the South Bay looks like it has octopus-like tentacles extending from its edges. These natural sloughs and creeks wind through the marsh plain, Coyote Creek being the largest of them, with several sloughs branching off from it. Coyote Creek is large enough to send salt water into tidal marshes far inland from the tidal mud flats near the shoreline and deep enough for harbor seals to travel and feed.

The watershed offers a host of trails and other recreational and educational opportunities.

The Bay Area Ridge Trail is a multi-use trail connecting hill and mountain ridgelines ringing the San Francisco Bay Area that will eventually stretch 550 miles. Some 330 miles have been completed, a segment of which abuts Mission Peak Regional Preserve. From Ed Levine County Park in Santa Clara County, the trail leads northeast up the ridge above Scott Creek to Monument Peak and then north toward Mount Allison. It skirts the top of Mount Allison, which is privately owned, and continues to Mission Peak. Monument Peak and Mount Allison form the ridgeline that is drained by the watershed.

The San Francisco Bay Trail is a planned shoreline trail encircling the entire bay. Within the Agua Fria Watershed, the trail runs through mostly urban areas until it reaches Coyote Creek Lagoon. It continues on top of the inboard levee along an estuarine body of water fed by both Mud Slough and Coyote Creek. 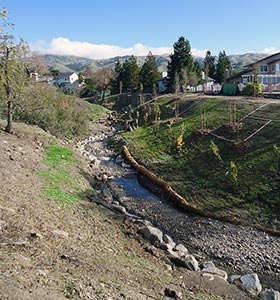 The watershed has seen a variety of restoration projects that exemplify either upstream creek restoration or downstream estuarine restoration.

Between I-680 and Briar Place, where Agua Fria Creek runs alongside Curtner Road, a restoration and bank stabilization project provides protection to nearby residential properties and improves habitat for the endangered California red-legged frog and other aquatic life. The restoration is a collaborative effort between the Alameda County Flood Control and Water Conservation District (the District) and the U.S. Army Corps of Engineers.

Since Scott Creek flows along the Alameda and Santa Clara county border, the District and the Santa Clara Valley Water District collaborated to restore this site located upstream of Green Valley Road in Fremont. The project stabilized the creek bed and bank and improved habitat by replanting with native plants. The creek was slightly realigned to increase the flow area, and pools were created to provide habitat for aquatic life.

The Alviso Salt Pond restoration is part of the larger South Bay Salt Pond Restoration Project. One of three major areas being addressed, Alviso was the subject of Phase I of the project, aimed at restoring salt ponds between Mud Slough and Coyote Creek. Project managers, scientists, and engineers created 330 acres of tidal salt marsh and tidal channel habitat that will evolve over time. Some 240 acres of shallow ponds with 50 nesting islands for migrating shorebirds were enhanced. Reconnecting an additional 1,400 acres of ponds to the bay created new marsh and shallow water habitats for pelicans, cormorants, and ducks.

The organizations below provide resources, education programs, and volunteer opportunities in the watershed.